Another round of Iranian oil shipments on route to Venezuela 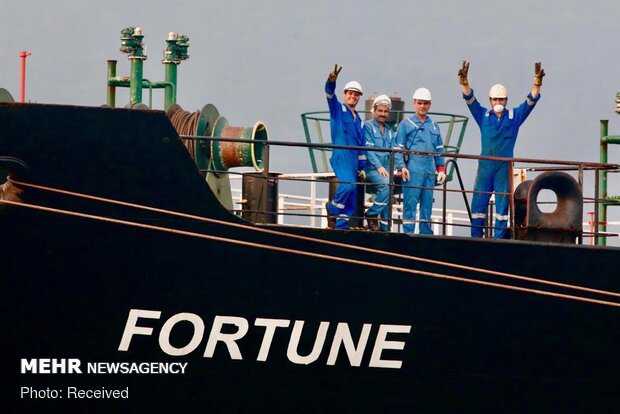 TEHRAN, September 09 (MNA) – The tracking service TankerTrackers reports that Iran has dispatched another round of oil shipments, this time three vessels, to Venezuela via Suez Canal.Reporting from tracking service TankerTrackers indicates three Iranian owned and flagged vessels have left Iran with a suggested routing to Venezuela via the Suez Canal, Trade Winds reported.

The ships named are the 35,200-dwt Forest, Fortune and Faxon (all built 2004), all controlled by National Iranian Tanker Co (NITC).

The trio was part of a group of five ships that discharged Iranian products in the South American country in May and June.

Loading is believed to have taken place in Port Shahid Rajaee in Iran.

The ships then switched off AIS, TankerTankers said.

Forest last transmitted in Bandar Abbas, Iran, on 14 August, while Faxon was off the coast of the United Arab Emirates on 31 August and Fortune off southern Iran on 28 August.

Security consultancy Dryad Global said it is likely that all three tankers will turn their AIS transponders back on as they approach the Suez Canal, to comply with transit regulations.

Dryad also said the move is a clear signal that Iran will not let the US interfere in its oil shipping.

It added the move presents the US with the choice of whether to board or detain the tanker trio.

But the firm added: "It is not yet clear whether the US believes it is in their national interest to follow this course of action, or if it is operating within a legal framework which would allow it to do so." Dryad predicted a "swift and proportionate" from Iran should the US intervene, following the "tit for tat" model of recent years.

The consultancy believes US or Saudi Arabian ships would then be at risk, and possibly UAE vessels too.

The Wall Street Journal, on August 15, cited US officials as saying that the US government had for the first time seized vessels allegedly carrying 1.116 million barrels of fuel to Venezuela.

It said the US had seized four vessels, called Luna, Pandi, Bering, and Bella, on the high seas and they were being transferred to Houston, Texas.

However, few days ago, three international companies filed a complaint against US, noting that they are the owner of the cargo that was seized by the United States and that the tankers were not heading to Venezuela.

The companies said they had sold the cargoes onwards to United Arab Emirates-based Citi Energy FZC, but payment was due upon delivery, which was disrupted by the seizure.

“Therefore, Claimants Mobin, Oman Fuel, and Sohar Fuel retain a financial stake in those agreements and have the immediate right to title, possession, and control of the Defendant Properties,” the companies wrote.

The companies also disputed the assertion that the shipments were bound for Venezuela.

“At the time they were seized, the Defendant Properties were destined for Trinidad for sale to customers in Peru and Colombia,” the companies wrote in the filing.

Tehran and Caracas have established close cooperation in recent years as both countries are under unilateral US sanctions.

Iran publicly sent five oil tankers to Venezuela in May 2020 to deliver the required fuel to the sanction-hit country.

Iranian officials have warned against US attempts against free trade between independent countries.