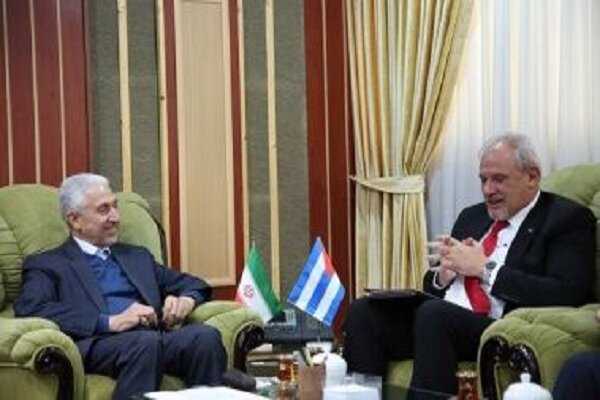 TEHRAN, November 24 (MNA) – Iran’s Minister of Science, Research and Technology Mansour Gholami met and held talks with Cuban Ambassador to Iran Alexis Bandrich Vega on the expansion of scientific and technological cooperation. During his meeting with Cuba’s Ambassador to Tehran, Gholami emphasized the need for closer cooperation in exchange of professors, students, and researchers between the two countries, saying that this kind of partnerships can be beneficial to both parties.

Learning Persian and Spanish languages is a good opportunity for both countries to exchange university students, he added.

The Science and Technology Parks are also among the other areas of cooperation between Iran and Cuba, he noted.

He also expressed hope that Iran and Cuba will expand their cooperation in all fields with the support of the Cuban Ambassador.

Alexis Bandrich Vega, for his part, invited Gholami to visit Cuba to hold talks with the Cuban Minister of Science, Technology, and Environment.

Emphasizing four issues concerning scientific and technological cooperation between Iran and Cuba, he said that learning the Persian language is among the priorities of the Cuban Embassy to develop relations between the two countries.

A course on religious and Islamic education has resumed at the University of Havana, he added, saying that it is hoped that Iran would help the university in developing this course in the field of professor exchange and the necessary information and research.