West attempts to repeat the Bolivian coup in Venezuela 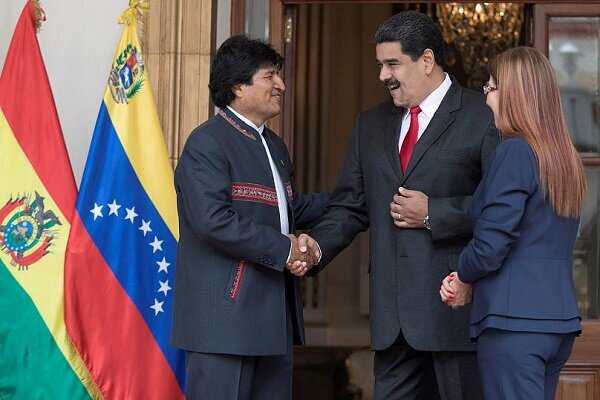 TEHRAN, November 17 (MNA) – After the coup by the Bolivian military against the president, Western media outlets are trying to incite the Venezuelan army against Maduro by praising this event and comparing it to the developments in Venezuela.The resignation of Evo Morales from Bolivia’s presidency following the military threat is considered a victory for Western countries, especially those that are trying to maintain Latin America as their colony.

Since Western countries cannot withstand figures like Hugo Chaves, Morales, Luiz Inácio Lula da Silva and the Castro brothers they stir up security problems in countries with leftist leaders to topple their governments.

Therefore, now that the anti-colonial president of Bolivia has stepped down due to military threats and the recent protests in the country, the West is praising these events to befool other countries, especially Venezuela, and show them the way.

In a report on Tuesday, Reuters compared the developments in Bolivia and Venezuela and wrote, “one key factor makes the Bolivia playbook a difficult one to carry out against Venezuelan President Nicolas Maduro: Venezuela’s armed forces have consistently refused to take the side of protesters as Bolivia’s military did on Sunday.” Reuters also tried, with a subtle tune, to persuade the Venezuelan army to follow the Bolivian military.

In addition to Western media, officials in these countries have also praised the Bolivian coup.

For example, US President Donald Trump in response to Bolivia’s developments claimed, "These events send a strong signal to the illegitimate regimes in Venezuela and Nicaragua that democracy and the will of the people will always prevail." He also issued a statement in which he hailed Morales' departure as moving towards a "completely democratic, prosperous, and free Western Hemisphere." The US is the architect of Bolivian developments In addition to Trump’s remarks, Washington urged the Bolivian legislature to hold a meeting to formally accept Morales’ resignation and began the civilian process of power transition to fill the current political vacuum.

A senior US State Department official also said Washington does not consider Morales' departure to be a coup, as Morales himself and the Mexican government have alleged.

It was instead the result of protests that showed the Bolivian people "have had enough of a government ignoring the will of its voters".

The European Union In response to the Bolivian developments, the EU called for all parties involved in the current political tensions to exercise “restraint” and “responsibility”.

"I would like to express clearly our wish that all parties in the country exercise restraint and responsibility and lead the country peacefully and quietly to new, credible elections that let the people of Bolivia express their democratic will," EU foreign policy chief Federica Mogherini said on Monday.

“If we are asked to send one and if the conditions are right, definitely we will do our best to send an Electoral Observation Mission,” she said at the press conference following the Foreign Affairs Council.

Venezuela is the next target The US has been seeking for years to overthrow the Venezuelan government and to put into power the political currents which are in line with Washington.

These efforts by the US have entered a new phase as Venezuela’s opposition leader Juan Guaido entered the scene.

By calling himself president, Guaido has started to fulfill US goals.

After Guaido’s action, 50 countries, mostly Western, backed him, but their backing did not succeed as the majority of the people and the Venezuelan army continued to support Maduro.

Of course, a few months ago, when John Bolton was still in the White House, a semi-coup was conducted against Maduro.

But since the coup did not succeed it led to disagreements between Trump and Bolton.

Now that the coup was carried out in Bolivia, the West seems to have found a new motive and intend to bring this wave to Venezuela.

Whether or not these efforts will work against Venezuela needs to be discussed, but what is obvious is that as long as leftist and anti-colonial leaders are in power in Latin American countries, events such as protests, unrest and coup (like the ones in Bolivia and Venezuela) and financial allegations (like the one against Lula de Silva in Brazil) are tools that can be used to bring pro-Western figures to power.