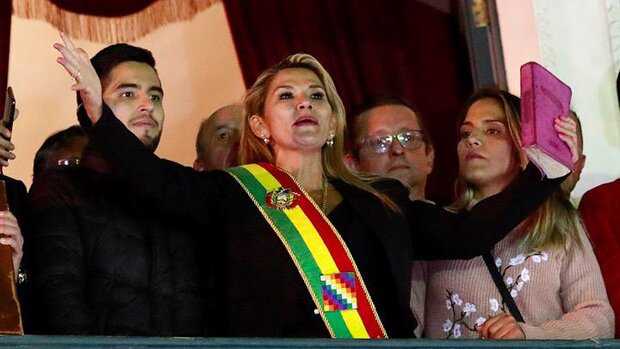 TEHRAN, November 13 (MNA) – Bolivian opposition senator Jeanine Anez has declared herself acting president of the South American country following Evo Morales' resignation.Anez said she was next in line under the constitution and vowed to hold elections soon.

Her appointment was endorsed by Bolivia's Constitutional Court, and the United States recognized her as the interim president.

The leftist Latin American governments have deplored an opposition-led coup d’état against the government of Bolivia’s Evo Morales, who was forced to resign under pressure from the army amid violent post-election protests.

Morales, the candidate of the Movement Towards Socialism (MAS) party, got 47.08 percent of the ballots in October elections and took office as Bolivia’s new president.

However, the top opposition rejected the outcome, saying there had been fraud in the election process and sparking violent street protests that left three people dead and hundreds more wounded, in what the Morales government called a coup bid.

In a statement on Tuesday, the Spokesperson of the Iranian Foreign Ministry Seyyed Abbas Mousavi condemned the US intervention in the internal affairs of Bolivia.

“Any regime changes by force and unlawfully especially through foreign interference is condemned and unacceptable,” the Iranian FM spokesman said in reference to the forcible removal of Bolivian president Evo Morales from power in a coup-like action by the US over the past few days after foreign-orchestrated protests and the army and police chiefs’ threats.

Mousavi said that the Islamic Republic of Iran believes that “any change should reflect the will of the people and should take place through the ballot boxes and be within the law.” MNA/PR