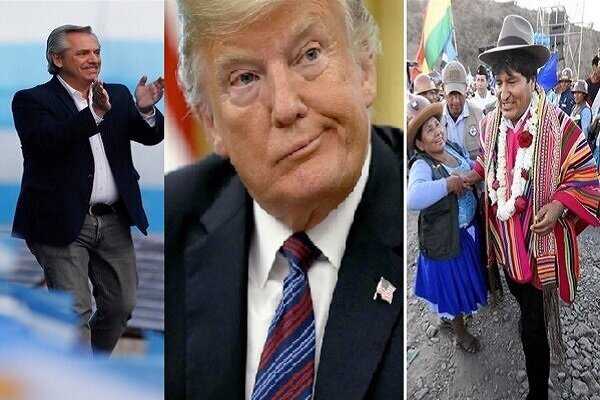 TEHRAN, November 09 (MNA) – In Argentina and Uruguay, leftist candidates won the elections and Evo Morales could maintain his position as the president of Bolivia, but in Chile, people have protested against the US-backed president.The failure of the US-backed candidate in the Argentinean election in recent days was a sign of the US failure in Latin America.

Leftist Alberto Fernandez, an opponent of US interventionist policies, won about 48 percent of the vote in general election and was announced as the new president in the first round.

This is while countries such as Venezuela and Cuba have maintained their anti-US sentiment.

Although the US has made an unceasing effort in the last two years to overthrow the current regime in Venezuela, it has not succeeded.

The New Left movement in Latin America, which was formed by the late Venezuelan president Hugo Chaves, has put Venezuela in many troubles but reduced US influence in the region to the point that even experts suggested that Washington has lost its backyard.

The New Leftist governments emerged in Latin America in the late 20th century.

Leftist leaders have distanced from some of traditional principles, but maintained the fight against American hegemony, just like their predecessors.

Latin America, with rich sources of oil, gas, and uranium, as well as great opportunity for investment, has been of particular importance from a geopolitical, geostrategic and geo-economic perspective.

The US has put control over Latin America on its agenda since 1823 when then president James Monroe offered his plan known as the “Monroe Doctrine”.

The Monroe Doctrine emphasized that as long as the US had not achieved real power and growth, it cannot be considered as an active element and main actor in world politics, thus it should obtain necessary economic growth in Western Hemisphere.

The doctrine also stated that South America and Caribbean are areas with high security priority whose fate is tied to the US fate, and the US must have a strong influence in the region to provide its own growth and development.

In the late 20th and early present century, Latin America has witnessed new developments, including the New Left movement.

The New Left in Latin America was founded and developed as leaders such as Chavez in Venezuela, Luiz Inacio Lula da Silva in Brazil, Evo Morales in Bolivia, Rafael Correa in Ecuador, and Daniel Ortega in Nicaragua came to power.

Opportunities and threats The US is concerned about the presence of its rivals, especially Russia and China, in Latin America and the cooperation of these two countries with leftist states in the region.

To counter China and Russia’s influence, the US has launched various plans to undermine leftist governments through economic crises and put its allied right-wing figures into power.

Washington’s comprehensive effort to topple the Maduro administration in Venezuela is an example.

On the other hand, China and Russia’s approach to Latin America and the tendency of New Left countries to ally with Beijing and Moscow can be a major deterrent to the implementation of the US plan in the region.

This is while the Trump administration is trying to redefine US role and position in Latin America.

From Trump’s point of view, the wrong policies of previous governments and developments have caused the US to lose its control over Latin America and the Caribbean, and instead increased the influence of US rivals, including China, in the region.

In an interview with Foreign Policy, following his recent visit to Colombia, Air Force Chief of Staff General David Goldfein said that the Trump administration is making a push to strengthen alliances across Latin America as part of an effort to counter rising Chinese and Russian influence in the United States’ backyard.

Goldfein said Colombia and other Latin American countries risked being locked out of US and allied operations if they stopped buying military hardware from the United States and turned to other markets instead.

China has invested heavily in the region to reach Latin America’s oil reserves.

Beijing has now become the largest trading partner of some Latin American countries, including Brazil, Chile, Cuba and Uruguay.

Unlike China, which seeks to use Latin American natural resources for its economic growth, Russia’s interests in this region are more strategic.