No choice for imperialist powers but to surrender to Iranian, Cuban nations 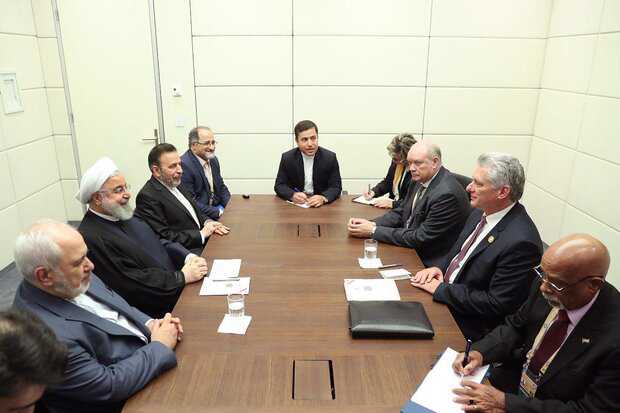 TEHRAN, October 26 (MNA) – Iranian President Hassan Rouhani said Iran and Cuba are paying the price for their resistance and insistence on independence against the US excessive demands, stressing that the arrogant powers have no option but to surrender to the Iranian and Cuban nations.In a meeting with his Cuban counterpart Miguel Diaz-Canel on the sidelines of the NAM Summit in Baku on Friday, he added that Iranian people consider the Cuban nation a combatant and resistant nation, as it were not for your resistance, the US exerted dominance not only on Cuba but also Latin America.

"Iran and Cuba have always had warm and friendly relations and their stances on regional and global policies were close to each other," he said.

Highlighting the two countries' commonalities on major international issues, including terrorism and the need for reinforcing NAM, Rouhani said that Iran and Cuba have always had good cooperation in the fields of science and modern technologies, especially health and pharmaceuticals and Tehran is ready for broadening mutual cooperation.

Cuban president, for his part, said that Havana has always favored warm and cordial relations with Iran.

He also hailed Rouhani's speech during the 18th NAM Summit as extremely firm and straightforward saying that today "you" [President Rouhani] explained the US excessive policies well.

Cuba has always condemned the US antagonistic policies against Iran, Diaz-Canel said, adding that the US exit from the JCPOA is denounced by Cuba, as Havana has always supported the Iranian nation and government's ideals.

Describing Iran-Cuba ties as historic and strong, he said that the two countries' economic and trade exchanges should increase in all fields.