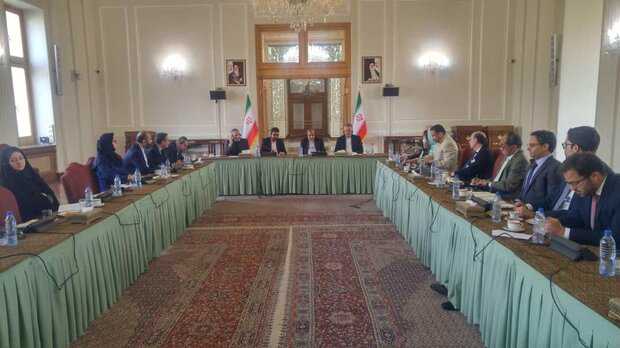 TEHRAN, October 14 (MNA) – Naming Stockholm Agreement a vital step in improving the political status quo of Yemen, Senior Assistant to Iran's Foreign Minister in Special Political Affairs Ali-Asghar Khaji expressed regret about the obstructions put by the other party on the way of having the agreement implemented.In a joint meeting with Yemen Ambassador to Tehran Ibrahim Mohammad Mohammad al-Deilami and Ambassadors from Latin America, the Iranian official supported application of political solutions for the Yemen crisis besides preserving Yemen's territorial integrity, independence, and unity.

He also briefed the participants about Iran's 4-point plan about Yemen.

Khaji named the sanctions of the Saudi-Emirati coalition on Yemen's air, sea, and land as the main reason halting access of Yemenis to humanitarian aid and stressed the need to avert military operations against the country.

Yemeni Ambassador to Tehran, for his part, outlined recent political and military developments in Yemen underlining the necessity of having war ended.

He named the humanitarian situation in Yemen disastrous and called on Latin American countries to increase their pressure for removing the blockade and sending humanitarian aid to Yemen.

In the meeting, the Latin American ambassadors emphasized the political solution to ending the Yemeni war and sending humanitarian aid to the country, as well.

At the end of the meeting the participants emphasized the following: - Respect for Yemen's sovereignty and territorial integrity, - Stopping military operations and establishing a ceasefire, - Resolving the Yemen crisis politically, - Conducting Yemeni- Yemeni talks without foreign interference, and - the need for paying serious attention to the humanitarian situation in Yemen and acceleration of sending humanitarian aid to the country.

On December 13, 2018, parties to the conflict in Yemen came together in Stockholm, Sweden, and agreed to a series of undertakings that raised hopes for a peaceful settlement of the conflict that began in 2015 and has resulted in an unprecedented humanitarian crisis and allegations that war crimes, crimes against humanity, and human rights abuses were committed by all sides.

The Stockholm Agreement sparked discussion of whether the parties had finally reached a lasting peace for Yemen.

Implementation of the Agreement, however, has been checkered with moments of positive steps towards compliance followed by retrogression into violent confrontations.