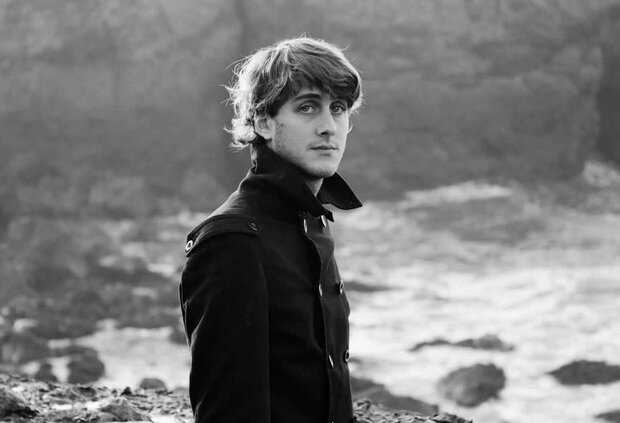 TEHRAN, March 16 (MNA) – Argentinean multi-instrumentalist Sebastian Plano talked to MNA about his life as a neoclassical musician, and believes that the melancholic vibe to his compositions stems from having stepped into a rich world of experiences so young, and the need to create music at the time he couldn’t.The first thing you think you have learned from the young Argentinian-born, multi-instrumentalist Sebastian Plano by watching his live performance is that he is charismatic, self-assured and sophisticated.

A first impression that may as well be true, given his impressive classical upbringing.

It may somehow throw you for a bit though, catching the Berlin-based musician off the stage for a short, friendly talk, as you realize he is also incredibly down-to-earth and would as readily play a grand, extravagant venue for ostensibly highbrow audience as he would for a small, hungry crowd at a pizzeria.

Plano performed for two consecutive nights on 7th and 8th March in Tehran, both of which receiving an enthusiastic response and standing ovation from the Iranian audience, who were bewitched by the sweet, and yet melancholic melodies that the young musician gave life to on stage.

The concert, called ‘In Between Worlds’, was organized by the ‘RooBeRoo Mansion’, an artistic-cultural institute in the heart of Tehran, as the third installment of the ‘Resonance Project’, an initiative started by RooBeRoo in December 2016 with ‘Autumn Light’ concert by Ólafur Arnalds, followed by the ‘Blue Hour’ concert by Italian composer Federico Albanese in 2018.

First of all, how did you arrange all those sounds on the stage? Because from where I was sitting, things looked totally crazy.

How did you make all that coordination look so easy and perfect?

It’s a long work over the years in the way of trying out different things and finding things that don’t work and sticking to things that work.

Having one hand on the cello and the other on the keyboard…that makes the coordination rather tricky.

But then, when it comes to having the audience watching your performance, it seems very natural, like some kind of a choreography that’s being practiced over and over for several times, so then you get this natural flow of playing the set.

It’s a choreography in a way.

So how does it feel like to be in a one-man show as opposed to playing with a band? And why did you decide to go solo? It’s very fulfilling, because you’re just by yourself, so everything is riding on you; all the, let’s say, pressure, and in a way that’s beautiful.

I’m mostly playing by myself, but I have also played with a string quartet many times.

So I have done it both ways.

There’s a difference when you go on stage with a band.

The whole ensemble lending you their support, and the music relationship that you maintain with other musicians on the stage is wonderful.

I have to say both playing solo and performing with a band are really nice in their own ways.

You had a classical upbringing.

How do you describe the transition into contemporary, minimalistic and electronic music?

Well, I started playing cello when I was seven.

I come from a family of classical musicians, playing in symphonic orchestra at home.

But it was all a hobby, so I continued my studies.

Writing electronic music was just a hobby for me at the time.

I just made, like, ten copies of an album, and gave it to my friends, so it was a private thing.

When I finished my master’s degree in San Francisco, I decided not to continue that road of classical music.

I didn’t want to perform.

I wanted to make and release my own music.

At that point, I started to collect the best tracks I had and released them as part of my debut album ‘Arrhythmical Part of Hearts’.

So basically, it all happened really organically.

Because originally, I wasn’t planning to release an album.

I had other plans.

But then suddenly I knew that I didn’t want to perform classical music and wanted to make my own music.

Would you say that people nowadays connect more easily and readily with your kind of music than they would with the classical genre? Is this the reason why many musicians like you, with classical upbringing, decide to venture into electronics? Yeah, definitely.

There would be a difference with the audience.

I wanted to become a writer.

And I was writing music since I was 12, and it was always growing and growing, until there was a voice inside my head that said okay, you need to do this.

You don’t need to play Beethoven, Mozart, or Haydn anymore.

You need to play your own music.

How long did that take for the voice to appear? Long.

It was a long process of ten years.

Maybe even more; ever since I started playing music.

I asked myself why I became a cello soloist, playing concertos with orchestras.

And then I started to notice that the whole thing, the whole world of the classical music, was not for me.

Sebastian Plano's live performance in Tehran, 8th March 2019 Your music has been compared to works by Ólafur Arnalds, Sigur Rós, Nils Frahm, Max Richter and the like.

What do you think about the comparison? Would you call them as your inspiration?

Yeah, I was firstly inspired by a different type of musicians, such as Vangelis.

And then later on, I was listening to Max Richter, and he was quite a strong influence on me.

Of course, I got to listen to a lot of Sigur Rós, and my colleagues, like Ólafur and Nils.

Definitely there is an influence, but I also pay attention to developing my own unique sound.

It’s hard not to notice that most of the music made in the neoclassical genre nowadays has this distinct ‘melancholic’ vibe to it.

Why is that, exactly? What does this shared melancholy reflect?

Well, that’s something I don’t know for sure.

It’s just a feeling I carry inside.

But it may have something to do with my life experiences.

I left home when I was seventeen, and I have been going around the world ever since.

The only thing that was taking me from place to place was the cello.

It was always for music.

I think, if you leave a place so young, there is going to be a lot of experiences, emotions and feelings following you.

And how are you able to process all of those things? You’re not, and you shouldn’t.

I mean, it’s all of these that shape you as a human being.

But then, the need to create has been always there.

I remember getting anxious when I was 14 or 15, or even at 20 when I was not writing music for quite a while, but I needed to.

So I think this sort of vibe comes from that need.

It’s lovely, though, whatever the reason.

This melancholy is something I always look for when I’m discovering new music.

It’s like it speaks more directly to people’s hearts.

And I look for things that move me; whether it’s in a conversation, or a walk in the park, or a piece of music, a piece of art, a book, anything.

I guess there is a lot of care in me for that quality, for finding things that are not just on the surface, but have depth.

What is your most favorite track that you have composed so far? And why is that your favorite? It’s very difficult to pick one, because they’re quite different.

But if I had to choose, then the one from the new album, ‘Verve’, has to be it.

It has a lot of history behind it.

And then I got my computer stolen, so I lost everything I had written, and I had to redo it all.

And the track ‘Verve’ was the strongest one on my memory out of all the tracks that I had lost, so I thought I need to do that track first.

I hadn’t written any notes, hadn’t recorded anything.

It was just in my head.

So it has that story behind it.

And also, in my opinion, it came out as really different and interesting as a piece of music.

The structure is pretty unique.

I don’t even know how it came to be.

Because of the piano playing, it’s frantic – there’s three pianos going at the same time.

I find it quite different from anything I’ve done so far, and for that, I liked it the best.

What brought you here to Iran, though? (Points to a girl sitting with us during the interview) They brought me here (laughs).

The RooBeRoo Mansion is doing these projects and different acts promoting neoclassical music.

They got into contact with me and told me they want me to play in Tehran.

What was your first reaction when you were approached with that proposal? I was surprised, yeah.

But I also wanted to play.

My wish is to share my music with people.

I could even play at a pizzeria, for friends, you know? It was definitely exciting to come to Iran.

It’s a place that I’ve never been, and it’s a completely different culture.

Then we kept talking and the project evolved and we got to make it happen.

How did you find the experience of playing for an Iranian audience? It’s great.

I mean, you feel what you feel when you are on the streets and talking to people.

There is a lot of heart in cultures like this.

I was also in Morocco and I felt the same thing.

People have so much care.

And there is a lot of kindness.

There is a difference when you compare these with, let’s say, European countries, or North America.

People release this energy that you feel.

And it’s the first time that I got someone in the audience shouting to hear a song.

Remember that guy that called, ‘we want All Falling Skies’? That never happened in my previous shows.

I like the audience to come out from being just an spectator.

This musical kinship has to be a mutual experience.

So they should do whatever they feel like doing – even stand up and dance.

It’s not only about the stage.

There is no musician and a stage without the audience.

How have you found your experience in Tehran so far? I have found many similarities between Tehran and my hometown Buenos Aires in Argentina.

You know, small similarities on the streets, the shops and the people.

Then again, I haven’t had much time to go sight-seeing yet, but what I’ve seen so far has been really nice.

Tehran is a massive city.

I’m staying on the 12th floor of my hotel, and it’s a horizon of houses from where I look (laughs).

If you were to compose a piece for Tehran based on the feedback you received from the audience, or the interactions you’ve had with the people you’ve met here, what would you call it, and how would it sound like? Well, I actually made one already, and you heard it.

I prepared a piece for this concert based on what I felt the music to sound like in this place; how I imagined it to be, and how it resonates inside me.

If I were to write something particular, though … well, to write music, you don’t have to think (laughs).

It’s one of those things that just comes to you.

The most powerful tool is your intuition.

Of course, your intuition can be surrounded by your experiences.

When I go back to Berlin, I’m bringing back so many new experiences with me, and some of them are probably going into my creative process.

Any words for you fans in Iran? Thank you! And I hope to come back.