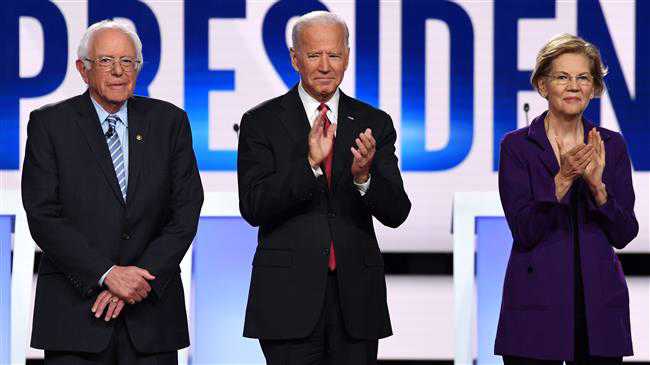 US President Donald Trump is facing a big defeat at the ballot box in 2020 amid an ongoing impeachment probe by Democrats, according to the latest polling. Trump is projected to lose by 10 points to Democratic frontrunner Joe Biden, one new survey shows, which also predicts Elizabeth Warren and Bernie Sanders both beat him comfortably.

The survey conducted by Investor's Business Daily/TIPP shows that just less than 45 percent of voters support Trump in comparison with his rivals, Biden, Warren and Sanders, who get 53%, 52% and 51% respectively.

This comes as Trump is under mounting pressure after Democrats launched an impeachment inquiry in September after a whistleblower alleged the Republican president pressured Ukraine to investigate his Biden.

That request by Trump, and accusations he conditioned nearly $400 million in military aid to Ukraine on the political favor, form the basis of the impeachment inquiry that now threatens his presidency.

PressTV-Dems lay out case for Trump impeachment probe
Democrats have laid out their case for the impeachment inquiry of Trump and pressed Republicans to stop supporting Trump.
House Democrats say Trump has abused his office for personal gain and jeopardized national security by asking Ukrainian President Volodymr Zelenskiy to investigate Biden and his son, Hunter, who had served as a director for Ukrainian energy company Burisma.

A total of 46 percent of the respondents expressed opposition to Trump’s impeachment and removal from the Oval Office.

The poll found that opponents to Trump’s impeachment have shrunk by 3 percent according to another poll from earlier this month, which said 49 percent wanted him to stay in office.

Asked whether they approved of the impeachment effort, 53 said they supported the bid while 44 percent disapproved