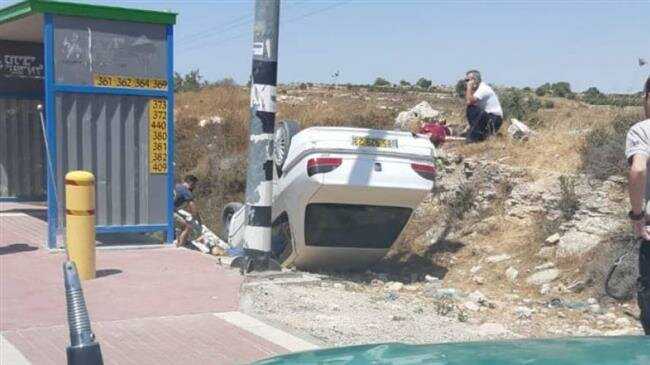 Israeli military forces have shot and killed a young Palestinian man in the southern part of the West Bank as tensions continue in the occupied territories following Israeli police’s attacks on Palestinian worshippers at the al-Aqsa Mosque compound in occupied East Jerusalem al-Quds last week. The Israeli military, in a statement released on Friday, alleged that the attacker was "neutralized" outside Elazar settlement in the Judean Hills region of the West Bank, located 18 kilometers south of Jerusalem al-Quds.

Israel's emergency and rescue service, Magen David Adom, said two teenagers were injured in the purported assault. A 17-year-old boy was seriously wounded and a woman, 19, was moderately hurt.

The boy was reportedly unresponsive, and was evacuated in severe condition with multisystem trauma to Hadassa Ein Karem Hospital, while the girl was taken with moderate injuries to Shaare Zedek Hospital.

On Thursday, Israeli forces shot two Palestinian teenage boys after accusing them of trying to stab them, leaving one of them dead at the scene.  Israeli military sources said the Palestinian teens were shot after they attacked Israeli police with knives in the Old City of Jerusalem al-Quds.

PressTV-Israel kills Palestinian youth in alleged stabbing attack
Israeli forces have shot two Palestinian youths allegedly trying to stab them, leaving one of them dead at the scene.
The Palestinian Health Ministry said one was killed at the scene, with the second left in critical condition at an Israeli hospital.  Israeli police said an officer was moderately wounded in the alleged assault.

On August 11, Israeli police clashed with Palestinian Muslim worshipers who had gathered at the al-Aqsa Mosque compound for the first day of the Eid al-Adha (Feast of Sacrifice) festivities.

Palestinians, facing off with Israeli forces in the packed compound, chanted, “With our soul and blood, we will redeem you, Aqsa.” The Palestine Red Crescent Society said 61 Palestinians were wounded, 15 of whom were taken to hospital.

The al-Aqsa Mosque compound sits just above the Western Wall plaza and houses both the Dome of the Rock and al-Aqsa mosque.

Palestinians have repeatedly warned of Israeli attempts to change the status quo of the al-Aqsa Mosque compound.

Al-Aqsa Mosque is the third holiest site in Islam.

PressTV-Israeli forces clash with Palestinian worshipers in al-Aqsa
Israeli police clash with Palestinian Muslim worshipers in the al-Aqsa Mosque compound on the start of Eid al-Adha (Feast of Sacrifice) festivities.
The occupied Palestinian territories have witnessed new tensions ever since US President Donald Trump announced his decision on December 6, 2017 to recognize Jerusalem al-Quds as Israel’s "capital" and relocate the US embassy in Israel from Tel Aviv to the occupied city.

On December 21, 2017, the United Nations General Assembly overwhelmingly voted in favor of a resolution that calls on the US to withdraw its controversial decision on Jerusalem al-Quds.

In an attempt to prevent the passing of the resolution, Trump threatened reprisals against countries that backed the measure, which had earlier faced a US veto at the UN Security Council.

Israel, however, rejected the world body’s resolution while thanking Trump for his decision to move the US embassy to Jerusalem al-Quds