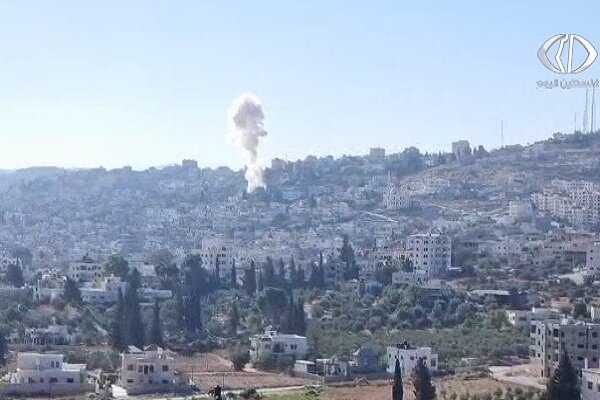 TEHRAN, September 28 (MNA) – One Palestinian was martyred and 9 others were injured during the attack of Zionist occupiers on the city of Jenin in the West Bank.Palestinian sources reported on Wednesday that Zionists raided the Jenin camp in the West Bank where a fierce armed conflict broke out between the Resistance fighters and the Zionists.

Palestinian security officer Ahmed Alawneh was shot in the head while resisting the Israeli occupation forces at the entrance of the Jenin refugee camp, Al Mayadeen correspondent tweeted.

Sources also announced this morning that the Zionists surrounded the house of a Palestinian martyr who was the executor of the martyrdom-seeking operation of Tel Aviv.

Following these clashes, a column of smoke rose into the sky from the Jenin camp.

Also, hospital sources reported that two people were wounded in the clashes.

The armed wing of the Islamic Jihad movement also announced in a statement that the Palestinian Resistance groups opened fire on the Zionist soldiers to confront their aggression on the Jenin camp.

Earlier on Tuesday, Zionist settlers attacked the suburbs of the Al-Aqsa Mosque with the support of the Zionist regime’s forces for the second day in a row under the pretext of the Hebrew New Year, which resulted in the protests of the Palestinians.

During the protests, the Zionist regime’s forces brutally arrested a young Palestinian youth in Al-Aqsa Mosque.