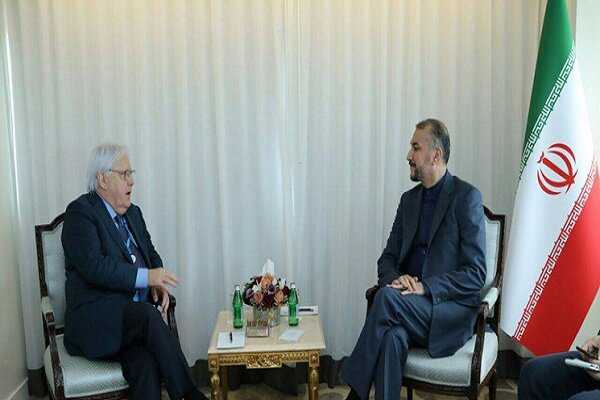 TEHRAN, September 27 (MNA) – Iranian Foreign Minister Hossein Amir-Abdollahian criticized the UN’s lack of offering humanitarian assistance to the Afghan immigrants living in Iran.Amir-Abdollahian made the remarks in his meeting with the Under-Secretary-General for Humanitarian Affairs and Emergency Relief Coordinator at the United Nations Martin Griffiths in New York on Tuesday, saying that while nearly five million Afghan immigrants live in Iran, a significant number also enter Iran daily, but there is nothing about UN humanitarian assistance in this regard.

During the meeting, the two sides discussed the latest humanitarian situation in Yemen, Afghanistan, Syria and Ukraine.

While expressing thanks to the unflinching efforts of Mr Griffiths, Amir-Abdollahian emphasized the support of Iran for the continuation of international humanitarian efforts aimed at reducing human suffering.

It is expected that the United Nations will pay attention to the lifting of the humanitarian blockade of the Yemeni people and also restoration of political dialogues by the Yemeni parties in order to establish permanent ceasefire in this country, Iran’s top diplomat added.

Amir-Abdollahian emphasized the necessity of fair distribution of humanitarian aid to all Syrian people and the more serious attention of international relief agencies to the Syrian people and stated, “As people of this country are suffering from the lack of drinking water and electricity, terrorists and armed men in Idlib enjoy much different situation.” Elsewhere in his remarks, he clarified Iran’s efforts to stop war in Ukraine and emphasized the need to pay due attention to the Ukrainian refugees.

The UN Under-Secretary for Humanitarian Affairs, for his part, thanked Iran’s hospitality to Afghan refugees and described Iran as a unique example in accepting and helping refugees in the world.