In meeting with Israeli PM, Macron calls for preserving JCPOA 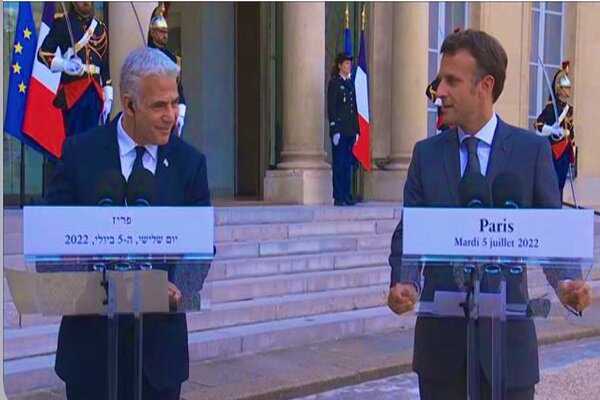 TEHRAN, July 05 (MNA) – "I would like to remind you once again of our desire to conclude the negotiations on a return to respect for the JCPOA as soon as possible," Macron said.On a visit to France on Tuesday, the new Israeli Prime Minister Yair Lapid urged French President Emmanuel Macron to revisit a 2018 proposal for a new Iran deal.

"Back in 2018 you were the first world leader to talk about the need for a new deal with Iran," Lapid said after the two warmly hugged each other on the front steps of the Elysee presidential palace.

The Israeli regime prime minister claimed that reaching a new agreement with Iran and the current situation would lead to a nuclear arms race in the Middle East.

However, Macron said "I would like to remind you once again of our desire to conclude the negotiations on a return to respect for the JCPOA as soon as possible," adding "We must therefore defend this agreement." Since the illegitimate and unilateral US withdrawal from the JCPOA in May 2018, Tehran has taken steps away from deal as the remedial measures and has said it will reverse course and will return to full compliance with the JCPOA once the other parties force Washington to lift the sanctions.

The Vienna talks between the Iranian delegation and the delegations of the P4 + 1 (Britain, France, Russia, China, and Germany) with the indirect involvement of the United States, which is not a JCPOA participant anymore after its illegal withdrawal from the deal in May 2018 were paused on March 11 at the request of the EU foreign policy chief Josep Borrell amid the US refusal to lift the illegitimate anti-Iran sanctions.

After a several-month of pause in the Vienna talks, the negotiations resumed in Doha, Qatar, on Tuesday, June 28.

Iran has said the talks would continue and an agreement is within reach if the Western countries adopt a realistic approach and lift the sanctions on Tehran.