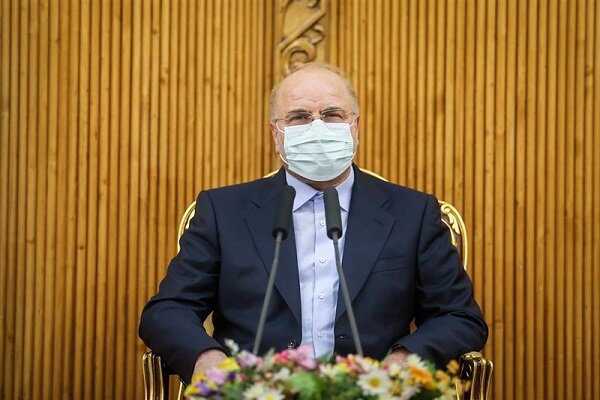 "Today, the Axis of Resistance is facing an economic war, and we can defeat the enemy in the economic war through joint cooperation in the economic and trade fields," the Iranian parliament speaker told the Syrian Prime Minister Arnous in the meeting in an apparent reference to the sanctions imposed on both countries of Iran and Syria.

Meanwhile, Ghalibaf expressed his dissatisfaction over the level of trade and economic relations among the countries in the Axis of Resistance, underlining "If we continue like this, there will be a serious danger to the axis of resistance." He further pointed to the grievances of the economic activists and traders and said, "The fact that a company or economic activist (businessman) cannot do his job and is not motivated contradicts the basic movement we need for [fighting in] economic warfare and is not appropriate for fighting the enemy in the economic field, so solving these problems is a serious need for an economic war." The Syrian prime minister, for his part, expressed his appreciation for Iran's help in the fight against terrorism, saying that the Syrian nation will never forget the Iranian sacrifices.

Arnous also referred to Bashar Assad's order to improve relations with the Islamic Republic in all fields and said that "At the moment, good things are taking place within the framework of the comprehensive agreement between the two countries, but this issue should be pursued and we believe that the trade relations between Iran and Syria must be promoted as much as possible." The Syrian Prime Minister also touched upon the grievances of businessmen and traders and stressed that he will issue necessary orders to solve some of the banking problems the private sector activists are facing immediately.

"Our goal and focus is to help the private sector increase the level of trade between the two countries," Arnous said.