Ghalibaf tells Assad Iran-Syria coop. to boost in next 4 yrs 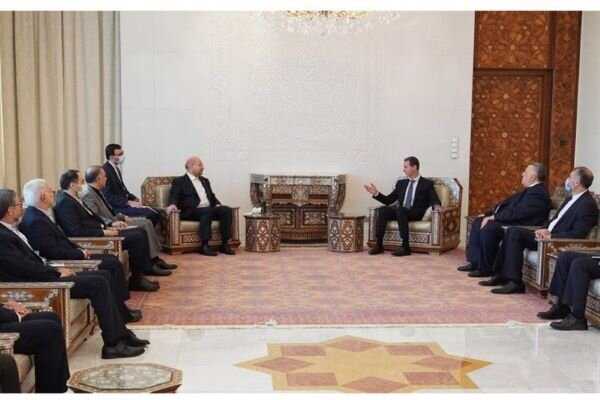 Ghalibaf who arrived in Syria yesterday met with President Assad in Damascus on Wednesday afternoon.

During the meeting, the parliament speaker of Iran said, "We must win the economic war, just as we won the military war, by focusing on trade and economic activities and supporting artisans and merchants." He further hailed the successful holding of recent presidential elections in Syria and congratulated Assad on that.

Ghalibaf went on to point to the sanctions that the US and its allies have imposed on both countries of Syria and Iran and said the next four years provide a good opportunity for boosting Iran-Syria cooperation.

"The new era in Syria coincides with a new era of the political situation in Iran in which the 11th parliament and the new government will act with a different approach," he said in an apparent reference to the incoming government in Iran under Ebrahim Raeisi.

He described the new government in Iran as an opportunity for Iran and Syria to overcome the economic war as very important and historic.

Ghalibaf further noted that the main focus of his trip is to promote economic and trade cooperation between the two nations.

According to SANA, President Assad for his part affirmed that Iran is a key partner to Syria and has stood by the Syrian people in the face of the terrorist war and provided them with support in all fields, pointing out that the coordination between the two countries in combating terrorism has given positive results on the ground and will continue until the liberation of all lands and the defeat of terrorist organizations.

The President also stressed that the two nations need to develop trade and economic cooperation, adding "We need to set up joint committees to clarify the type of cooperation." KI/5268094