Cleric terms ‘Islamic Unity’ as a strategy to reach peace 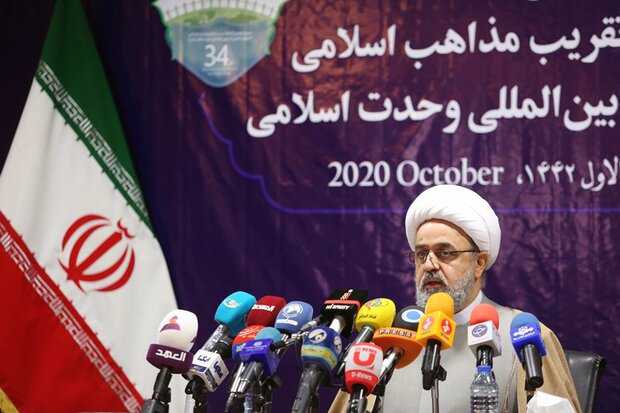 TERHAN, October 29 (MNA) – A senior Iranian cleric described the unity among different Muslim beliefs as a strategy rather than a tactic, to move along the path of peace.Addressing the opening ceremony of the 34th edition of the International Islamic Unity Conference which was held online on Thursday, Hojjat-ol-Eslam Hamid Shahriari, the head of the World Forum for Proximity of Islamic Schools of Thought, said “The Islamic Unity Week, which coincides with the auspicious birth anniversary of Prophet Muhammad (PBUH) is an opportunity to move the Muslim world toward peace, friendship, brotherhood and affinity.” He noted that this is such an approach is a great strategy to spread peace among nations.

The 34th edition of the International Islamic Unity Conference is scheduled will be held till November 3 as a webinar.

A special website has been designed for such purpose which offers all the information needed for participants in the online event.

The International Islamic Unity Conference is held in Iran annually in an effort to lay the ground for unity and solidarity among Muslims and provide solutions for their problems.

It gathers Shia and Sunni scholars from all over the world.

Many Iranian Shia and Sunni scholars also attend the event.