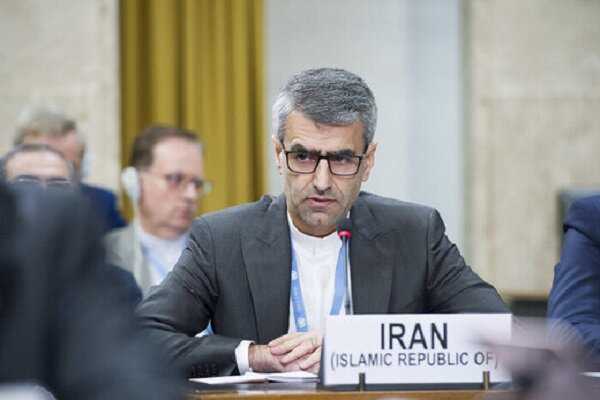 TEHRAN, September 15 (MNA) – Iran's ambassador and Permanent Representative at the UN Office in Geneva Esmaeil Baghaei Hamaneh blasted the US for continuing its oppressive sanctioning policy against the developing countries.

The United States is committing blatant human rights violations in the countries that are under sanctions, Iran's ambassador and Permanent Representative at the UN Office in Geneva Esmaeil Baghaei Hamaneh said on the second of the 48th regular session of the Human Rights Council.

The Iranian diplomat added that the responsibility of governments to protect the human rights of their own people is clear, but this should not prevent human rights mechanisms from addressing blatant human rights violations in one country due to the illegal actions of other governments.

Hamaneh pointed to the dire situation in Afghanistan, saying that it is the result of 20-year of US occupation and its military intervention.

The Iranian envoy said that the Islamic Republic of Iran wants the formation of an inclusive government in Afghanistan that represents the people and represents the country's ethnic and religious diversity, and that respects the human rights of all Afghans through a peace process led by Afghans and controlled by Afghans.

The 48th regular session of the Human Rights Council began on Monday and will continue for a few weeks.