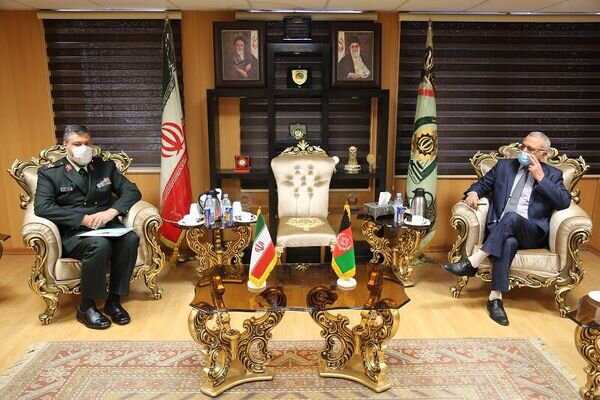 TEHRAN, October 19 (MNA) – Anti-narcotics officials of Iran and Afghanistan stressed the need for joint cooperation in the fight against drug trafficking.Anti-narcotics police Chief of NAJA (Islamic Republic of Iran Law Enforcement Forces) Colonel Majid Karimi met and held talks with Deputy Minister of Counter-narcotics of the Ministry of Internal Affairs of Afghanistan Hashim Aurtaq on Monday.

During the meeting, Karimi stressed the need to promote joint cooperation between the two countries in the fight against drug trafficking and transit.

He expressed hope that the good opportunity created for the two countries would be used in the best possible way to promote bilateral cooperation as well as the fight against transit and drug trafficking.

Karimi pointed to high cultivation of poppy and opium production in Afghanistan, saying that given the high production of narcotics in Afghanistan, there is a need for more effective cooperation between the police of the two countries in order to combat drug trafficking and transit.

He also announced Iran's readiness to assist the Afghan police in the fight against drug trafficking.

Iran is ready to exchange information on money laundering of drug trafficking networks, which is mainly carried out in other countries, as well as train of Afghanistan's detection dogs, he said. Referring to the need to establish intelligence and operational committees between the two countries' anti-narcotics police at the level of neighboring provinces, Karimi highlighted that Iran's anti-narcotics police forces have seized over 600 tons of illicit drugs in the first 7 months of current Iranian year (starting March 20) which have been transferred to the country from eastern borders of Afghanistan and Pakistan.

Acknowledging the production of 84% of the world's drugs in Afghanistan, Hashim Aurtaq, for his part, said that the country have some problems in the fight against narcotics cultivation and production due to the presence of Taliban forces in some border areas and provinces of Afghanistan.

Referring to the dismantling of 52 crystal manufacturing laboratories in Afghanistan, Aurtaq added that his country understands the concerns and sensitivities of the Islamic Republic of Iran in this regard.

He expressed hope that more effective steps will be taken in dealing with drug traffickers by reforming and revising the anti-narcotics laws.

Being a neighbor to the biggest producer of drugs in the world has caused the Islamic Republic of Iran to shoulder a heavy burden as one of the main routes for drug transport.

Iran is at the forefront of the fight against drug trafficking and thousands of Iranian forces have been so far martyred to protect the world from the danger of drugs.

Despite high economic and human costs, the Islamic Republic has been actively fighting drug trafficking over the past decades.

Iran has spent more than $700 million on sealing its borders and preventing the transit of narcotics destined for European, Arab, and Central Asian countries.

The war on drug trade originating from some regional countries has claimed the lives of nearly 4,000 Iranian police officers over the past four decades.