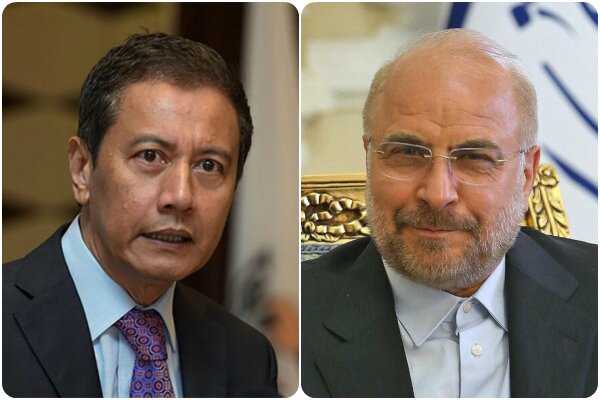 TEHRAN, October 19 (MNA) – Parliament Speaker Mohammad Bagher Ghalibaf condemned the US’ continued economic terrorism against the Iranian nation, calling on Muslim leaders not to follow such sanctions.“The US regime has imposed cruel and illegal sanctions against the Iranian nation, and we expect friendly and Islamic countries not to comply with these sanctions,” Ghalibaf said on Monday in a phone talk with his Malaysian counterpart, Azhar bin Azizan Harun.

The Malaysian speaker, for his part, expressed his country’s interest in “strengthening relations between the two Muslim countries and developing relations between the two parliaments." He added, "In the Malaysian parliament, we are following the activities of the friendship groups of the two countries with interest, and we believe that these groups can further strengthen the parliamentary relations between the two countries." Referring to the need to implement the existing agreements between the two countries, Harun said, "The Malaysian Ministry of Foreign Affairs and the international section of the Parliament will make every effort to implement all Iran-Malaysia agreements." He said every effort should be made for the unity of Islamic countries and said, "Iran and Malaysia are always trying to strengthen the unity of the Islamic Ummah, especially as the empowerment of unity at the level of Islamic countries is necessary to face challenges." "Malaysia still has its position against the sanctions and we do not recognize illegal sanctions that are not in line with UN resolutions," Harun concluded.