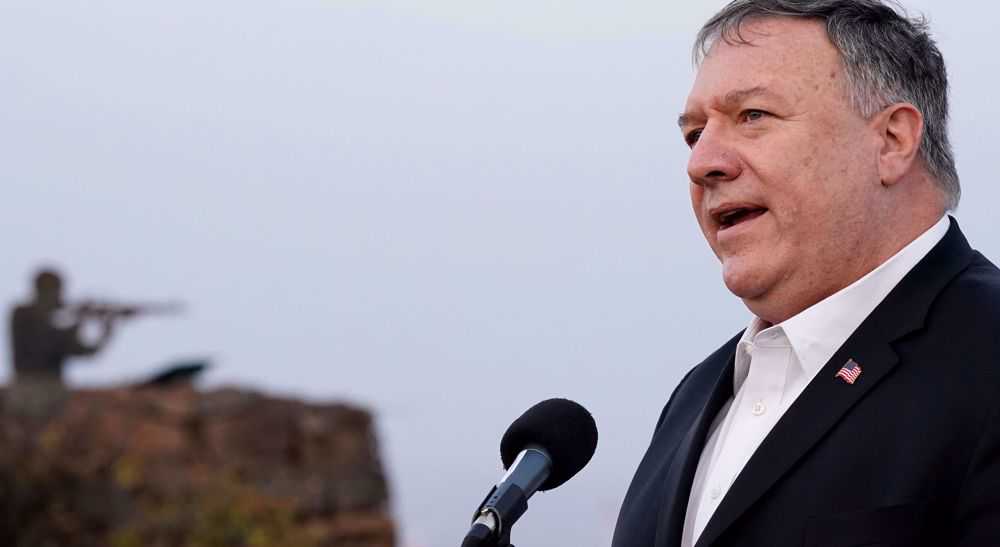 Pompeo makes controversial visit to an Israeli settlement
US Secretary of State Mike Pompeo reiterates Washington’s support for Israel’s settlement activities as he pays a visit to a settlement project in the occupied West Bank.
Pompeo is the first US secretary of state to make such an unprecedented visit.

Pompeo, in a press conference, reiterated Washington's support for Israel’s illegal settlement in the occupied West Bank, breaking with international consensus against Israeli activity in the region.

In the press conference, Pompeo voiced his ambitions to help Israeli businesses in the West Bank avoid international sanctions.

Pompeo announced that the US would brand the international Palestinian-led boycott movement against Israeli products as “anti-Semitic”.

His announcement that products from the settlements can be labeled “Made in Israel” was assessed as a major US foreign policy shift.

The top diplomat's move labelled as the "Pompeo Doctrine" was seen more as a self-promoting stunt rather than a pursuit of the best interests of the US    Pompeo's visits "have nothing to do with America's ambitions but his own in 2024," Aaron David Miller, a senior fellow at the Carnegie Endowment for International Peace, tweeted.

The Arab League issued a statement saying his trip to the occupied West Bank and the Golan Heights was against the norms of international law.

Syria, Arab League condemn Pompeo’s visit to occupied West Bank, Golan Heights
The Arab League and government of Syria condemn US Secretary of State Mike Pompeo
US President Donald Trump, who media announced has lost the disputed 2020 presidential election, has said the US was no longer considering Israeli settlements in the occupied West Bank “inconsistent” with international law.

Experts believe the outgoing Trump administration has broken with decades of bipartisan US practice by not opposing the illegal Israeli settlements.However, the presumptive president-elect Joe Biden has said when his administration takes over power it will restore US opposition to the settlements which are considered illegal under international law