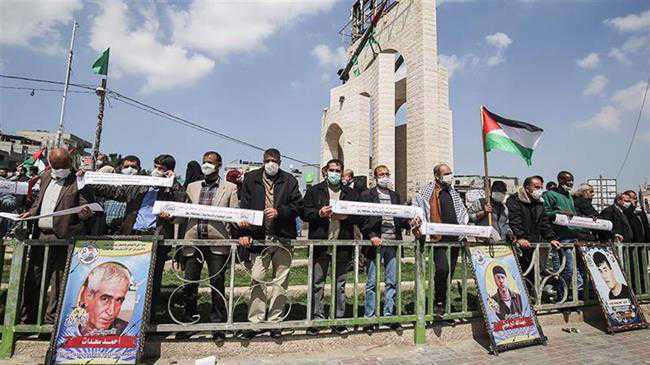 The Palestinian Ministry of Foreign Affairs and Expatriates has called on the Israeli regime to immediately release over 5,000 Palestinian prisoners from its jails amidst rising cases of infection with a new coronavirus in the occupied territories. The ministry, in a statement released on Wednesday, announced that the Israeli Prisons Service (IPS) is not providing proper health protection to Palestinian prisoners, as Israeli authorities have demonstrated that they have no intention of easing apartheid to make sure Palestinians are able to face the epidemic under better conditions.

“Israel is in violation of its obligations under international law, the Geneva Conventions and human rights principles that demand Israel, as the occupying power, … take full and direct responsibility for the life and health of the prisoners,” the statement read.

“Palestine will continue to follow up on the health conditions of the prisoners in light of the outbreak of this pandemic with the relevant international parties, especially the International Committee of the Red Cross (ICRC),” it added.

Palestinian prisoners threaten hunger strike over Israeli coronavirus response
Palestinian prisoners are threatening to go on hunger strike to protest Israeli officials’ failure to enforce measures to prevent the spread of coronavirus.
Earlier in the day, a Palestinian political prisoner at Nafha Prison in the southern part of the Israeli-occupied territories set fire this morning to a room used by the prison guards to protest the prison administration’s neglect of the health conditions for the prisoners.

According to Qadri Abu Bakr, head of the Commission for Prisoners Affairs at the Palestine Liberation Organization (PLO), the prisoner, identified as Ayman Sharabati, did the action when prisoners were taking their daily walk out of their cells in protest at the way the IPS deals with the health situation in prisons and its failure to take enough precautions to prevent the spread of coronavirus among the detainees.

He said the prisoner was immediately placed in solitary confinement.

Abu Bakr said the IPS has reduced the medical staff in jails to only one nurse in every facility, which showed the Tel Aviv regime’s policy of medical negligence for prisoners.

Use socks as face masks to avoid virus: Israel to Palestinians
Israel has intensified its abuse of Palestinian prisoners, asking them to use their socks as masks to avoid the coronavirus disease.
He warned that if it continued, the situation could lead to serious reactions from the prisoners.

Abu Bakr urged the ICRC and other rights organizations to intervene on behalf of Palestinian prisoners to make sure they get the proper health care amidst the coronavirus pandemic.

The association noted its lawyer had been able to speak with three of the prisoners, identified as Ahmad Nassar, Qais Daraghmeh, and Ibrahim Awad, and that each of them was being held in a separate room, which they were not allowed to leave.

The Arab League has already called on international human rights organizations and other relevant bodies to secure the release of Palestinian prisoners from Israeli jails.

The assistant secretary General of the 22-member regional organization, Said Abu Ali, highlighted in a press statement that protection of prisoners is an imperative, especially in times of pandemics such as the current coronavirus crisis across the globe.

Arab League demands of Palestinian inmates amidst coronavirus outbreak
The Arab League has demanded the immediate release of Palestinian prisoners from Israeli jails amid the outbreak of the novel coronavirus virus in the occupied territories.
He also called on the international community to pressure Israeli authorities to release around 5,000 Palestinian prisoners, including hundreds of elderly inmates with health issues, 180 juveniles and 43 women, before the number of coronavirus infections in the Israeli-occupied Palestinian territories spirals out of control.

Palestinian prisoners in Israeli detention centers have threatened to go on an open-ended hunger strike in protest at a ban on meeting attorneys, lack of protective measures by guards during searches in their cells, and denial of medical protection gear in the wake of soaring cases of infection with the virus called COVID-19.

Haaretz newspaper
that prisoners affiliated with the Islamic resistance movement, Hamas, returned their breakfast and lunch servings on Thursday, while those affiliated with Fatah returned some meals during the weekend.

They plan to launch a full hunger strike at the beginning of next month.

“Prisoners are enclosed in their cells,” the source said, adding that Israeli wardens “who deliver food [to Palestinian prisoners] are walking around, handing it out with no gloves or masks….” Palestinian prisoners have not been tested for the coronavirus, as Israeli health ministry regulations in place call for a test only in cases where there exist both exposure to a confirmed patient and symptoms of COVID-19, which include fever, cough and shortness of breath