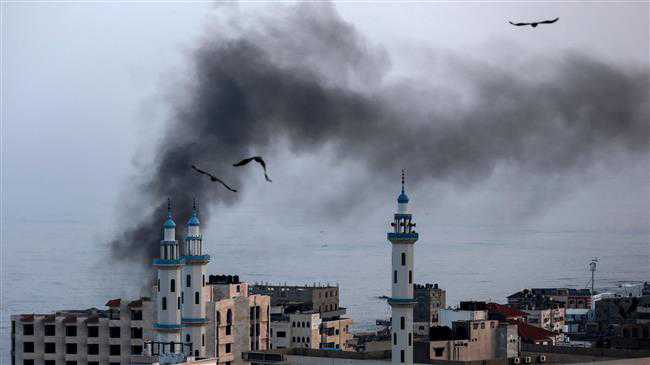 Two more Palestinians have been killed in the Gaza Strip as the Israeli military renews its air raids against the besieged coastal enclave for a second day, prompting retaliatory rocket fire into the occupied territories. Al-Quds Brigades, the armed wing of the Islamist Jihad movement, said on Wednesday that a member of the resistance group, Khalid Mavaz, 38, had lost his life in an Israeli airstrike on central Gaza.

The Israeli military said its forces targeted Mavaz as he was preparing to launch rockets into the Israeli-occupied territories, a day after the regime assassinated senior Islamic Jihad commander Baha Abu al-Ata, along with his wife, in a targeted strike.

Another Palestinian also lost his life in the raids, according to the health ministry in the blockaded enclave, bringing the death toll from the regime’s assaults since Tuesday morning to 12.

According to the latest figures by the Gaza Health Ministry, the Israeli raids have left a total of 11 Gazans dead and 45 others injured, including 23 children.

Ata’s assassination sparked Palestinian retaliatory attacks, with Israeli military sources saying more than 200 rockets have been fired from Gaza into the occupied territories on Tuesday.

PressTV-Israel kills resistance cmdr., Gaza fighters strike back
The Israeli military has assassinated a senior commander of Palestinian Islamic Jihad movement in an airstrike in Gaza, sparking a barrage of retaliatory rocket fire from the besieged strip.
(This item is being updated.)
Original Article Source: Press TV | Published on Wednesday, 13 November 2019 07:04 (about 96 days ago)