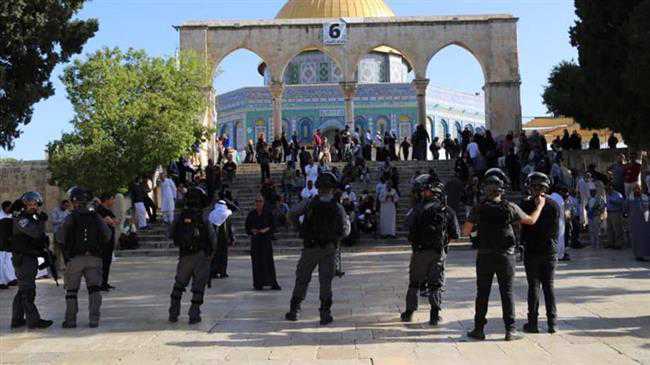 Hundreds of Israeli settlers have violated the al-Aqsa Mosque compound in the occupied Old City of East Jerusalem al-Quds. On Tuesday morning, at least 300 Israeli settlers entered the compound from the Moroccan Gate, the Palestine Information Center reported.

It added that those settlers responded to calls made by extremist groups for mass break-ins at the al-Aqsa Mosque compound to mark a religious event.

On October 6, more than 120 Israeli settlers also violated the compound from the same gate, attempting to perform rituals.

Israeli forces stationed at al-Aqsa gates imposed restrictions on Palestinian worshipers’ access to the mosque, demanded their ID cards, frisked them, and searched their bags, according to a statement released by the Department of Islamic Endowments in Jerusalem al-Quds at the time.

Except for Fridays and Saturdays, Israeli settlers violate the mosque in the morning and in the afternoon on a daily basis, the report further said.

The Israeli soldiers shut the Moroccan Gate — which is used by Jews to enter the Mosque — at 10:30 a.m.

local time after the settlers complete their morning tours at the holy site.

Later in the afternoon, the same gate is reopened for evening tours by settlers.

According to an agreement signed between the Israeli regime and the Jordanian government after Israel’s occupation of East Jerusalem al-Quds in 1967, non-Muslim worship at the compound is prohibited