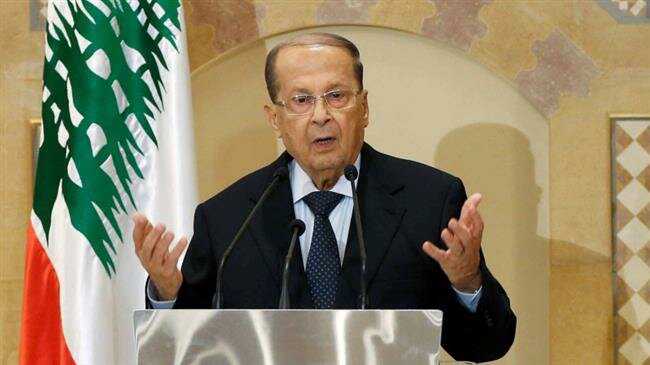 Lebanese President Michel Aoun has censured the Israeli regime over breaching international regulations, treaties and principles, and seeking to impose a new fait accompli in the occupied territories.

“Israel violates other states' sovereignty, occupies the Golan Heights while declaring al-Quds (Jerusalem) as its capital and occupying Palestinian territories,” Aoun said during an event in the capital Beirut.

The Lebanese president then described the Israeli regime's violation of international law as a dangerous precedent of the conspiracies being hatched for the Middle East region.

“It is true that big wars have receded somehow; but their repercussions continue to have a bad impact.

The most dangerous issue in this framework is the investment of these wars' impacts by fragmenting the east to establish new alliances based on racism and sectarianism,” he said.

Aoun then strongly condemned the US recognition of Jerusalem al-Quds as the capital of Israel, and the Tel Aviv regime “flagrant violation of all international law and resolutions.”

“Israel’s violations include settlement expansion, racist legislation and its disrespect for the inviolability of internationally recognized borders,” the Lebanese president pointed out.

His decision infuriated the Palestinians, who declared that Washington could no longer play a role as lead mediator in the Middle East peace process.

It also sparked outrage across the Muslim world and even Washington's Arab allies.

The United Nations General Assembly on December 21 that year overwhelmingly voted in favor of a resolution that calls on the US to withdraw its controversial recognition of Jerusalem al-Quds as the Israeli capital.

PressTV-UNGA overwhelmingly votes against US move on al-Quds
The United Nations General Assembly has voted in favor of a resolution that calls on the US to withdraw its controversial recognition of Jerusalem al-Quds as Israeli "capital."
On May 14, 2018, the United States officially announced the opening of its new embassy in Jerusalem al-Quds.

“Today we open the United States embassy in Jerusalem [al-Quds], Israel," US Ambassador to Israel David Friedman said at the beginning of the inaugural ceremony on Monday, attended by a US delegation from Washington and officials of the Israeli regime.

PressTV-US opens new Israel embassy amid Gaza massacre
The US officially opens its diplomatic mission in Jerusalem al-Quds amid a deadly Israeli crackdown on Palestinian protests.
Among the participants were US President Donald Trump’s daughter, Ivanka, and her husband Jared Kushner, who has been tasked by Washington to negotiate an end to the Israeli-Palestinian conflict.

More than 600,000 Israelis live in over 230 settlements built since the 1967 Israeli occupation of the Palestinian territories of the West Bank and East Jerusalem al-Quds.

The UN Security Council has condemned Israel’s settlement activities in the occupied territories in several resolutions.

PressTV-Israel to build over 250 new settler units in West Bank
Over 600,000 Israelis live in settlements built since the 1967 occupation of the Palestinian territories.
Less than a month before US President Donald Trump took office, the United Nations Security Council in December 2016 adopted
Resolution 2334
, calling on Israel to “immediately and completely cease all settlement activities in the occupied Palestinian territories, including East Jerusalem” al-Quds.

Palestinians want the West Bank as part of a future independent Palestinian state with East Jerusalem al-Quds as its capital.

The last round of Israeli-Palestinian talks collapsed in 2014.