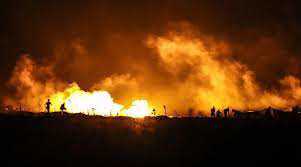 Palestinian locals in the small town of Beita have been for weeks resisting the expansion schemes by Israeli settlers with all means.

On Wednesday, they started the so-called ‘night confusion’ activities in defiance of attacks by settlers and occupation forces in their town which lies near the occupied West Bank city of Nablus.

The residents of Beita and the surrounding villages have been for weeks confronting the construction of the new colonial settlement atop Jabal Sabih as well as the seizure of lands belonging to the villagers of Beita, Huwarra, and Za‘tara to inaugurate a new settler-only bypass road.

Jewish settlers arrived on the hill outside Beita in early May Soon after, daily protests began, which repeatedly ended in clashes with settlers who have been backed by Israeli occupation troops.

Four Palestinians including a teenager have been martyred, and more than 300 injured, the Palestinian Red Crescent said.

According to villagers, five people have been arrested since the night rallies began.