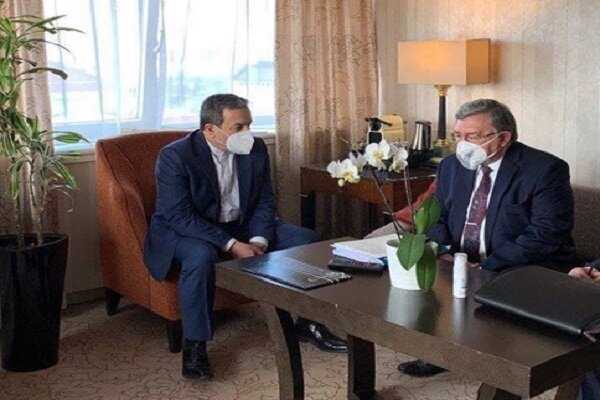 TEHRAN, May 01 (MNA) – On the eve of the resumption of the meetings of the Joint Commission of the JCPOA in Vienna, the heads of the Iranian and Russian delegations met and held talks on the latest developments on the nuclear deal.The head of the Iranian negotiating team Seyyed Abbas Araghchi and the head of the Russian delegation Mikhail Ulyanov held a meeting on Sunday morning to review the latest issues on the JCPOA During the meeting, Araghchi and Ulyanov stressed the need to maintain close ties between the two countries.

The Russian side reiterated its support for the nuclear deal and the need for the lifting of the US sanctions against Iran.

The meeting of the Joint Commission of the Joint Comprehensive Plan of Action (JCPOA) between representatives from Iran and the remaining signatories to the Iran nuclear deal namely Russia and China and the E3 or the UK, France and Germany will be held in Grand Hotel in the Austrian capital of Vienna today.

The meeting of the commission is held to review and summarize the results of the work of the expert groups about the nuclear issues, sanctions lifting and executive arrangements at the level of heads of delegations.

After this meeting, the negotiating delegations are scheduled to return to their countries.