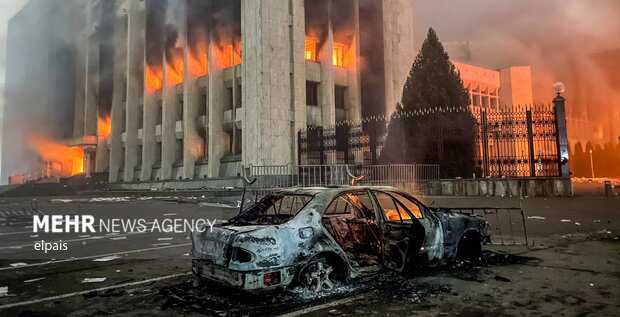 TEHRAN, January 10 (MNA) – The fast pace of the security developments in Kazakhstan has raised many speculations as to the reasons behind them in the strategically important country.

Tripling the fuel prices by the government in Kazakhstan sparked widespread protests resulting in dozens of deaths and hundreds of injuries.

As the protests continued, the Kazakh President tried to bring the situation under control by dissolving the government, and declaring a state of emergency and returning fuel prices to a level even lower than the pre-protests period.

However, the demonstrators continued their protests and started armed actions against the government.

As the protests turned violent, the army took action, and the president appealed to the Collective Security Treaty Organization (CSTO), which has six members (Russia, Armenia, Kyrgyzstan, Belarus, Tajikistan and Kazakhstan) for help. According to Article 8 of the CSTO charter, member states should cooperate in order to combat organized crime, terrorism, threats to territorial integrity, etc.

against anyone of the members. Russia, Armenia and Belarus sent troops to Kazakhstan following a request from the president to help the country. There are different readings on the ongoing developments in Kazakhstan and the possible motives and scenarios behind the violent unrest. Given the continuation of the unrest in various parts of the country despite returning the fuel prices event to levels lower than before and the dissolution of the government, as well as the history of American hand in the so-called velvet revolution in the post-Soviet states, one can say that the United States could be involved.

The following are reasons why the American involvement in the unrest in Kazakhstan is likely: *Increasing US influence in Kazakhstan as it has massive oil, gas and uranium resources *Opening a new front against Russia while the tensions between Russia and Ukraine is escalating with the aim of putting pressure on Moscow to make concessions *Putting pressure on Russia to reduce its cooperation with and support for Iran in the Vienna talks *Reducing China's influence in Central Asia and putting obstacles in the way of the One Belt and One Road Initiative, a major part of which crosses Kazakhstan and the Caspian Sea. *Reducing Russia's influence and containing Russia by creating crisis and unrest in a country that shares thousands of kilometers of border with it. On the other hand, some have accused Russia of being involved in the developments in Kazakhstan, citing the following reasons as Moscow's motive for leading the recent unrest: *Russia's attempt to bring under its control regions in Kazakhstan that are of Russian descent with the aim of squeezing any prospects for future US and Western influence *Putting pressure on Turkey and curbing Ankara's expansion of Turkic influence in the Central Asian region, which has been heavily invested in by Turkey since the time of the Second Karabakh War. *Curbing China's growing influence in the region, the traditional Russian backyard, and gain more concessions from Beijing with regard to the One Belt Road project *Influencing energy security in Europe and Turkey Conclusion Given the need for close China-Russia cooperation, as well as Russia's reluctance to escalate tensions with the United States and NATO in Eastern Europe, the Black Sea, Syria and Afghanistan, it makes sense to accuse Russia of involvement in Kazakhstan developments One can say that Russia's intelligence superiority over US and Western actions in Kazakhstan over the past years and months has instigated Russia and its allies to take the initiative in response to developments in Kazakhstan, something that the Americans did not expect While only time will tell where the developments are heading, the United States and its allies are expected to impose new economic sanctions on Moscow by offering rhetoric against it.

The Western powers will seek to force Russia to make concessions with regard to the Ukraine issue and other ongoing conflicts between Russia and the West in the short term, but in the long run, they will weaken its economic structures and cause it to collapse, as they did with the former Soviet Union. Spreading instability in the region is the West's low-cost strategy to contain Russia and China.

The importance of this approach becomes even clearer given the fact that Kazakhstan is one of the largest countries in the world and has lots of shared borders with Russia, which makes it difficult to curb Western-backed extremism and terrorism.