Tehran-Baku on path of constructive interactions 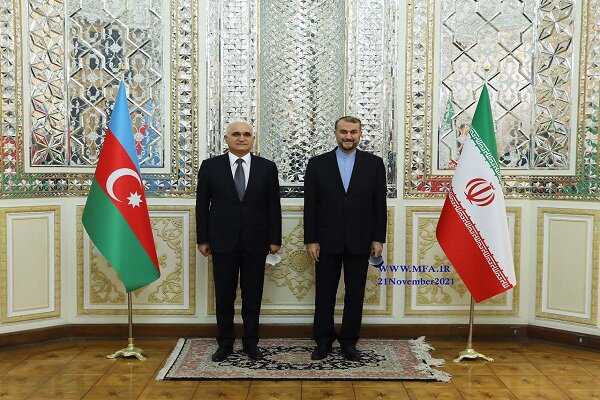 TEHRAN, November 23 (MNA) – Tehran is once again witnessing an important step in the framework of strengthening relations with its neighbors.

The visit of the Deputy Prime Minister of the Republic of Azerbaijan Shahin Mostafaev to Iran to discuss the development of economic cooperation has marked this important development.

Shahin Mostafaev is a close and old friend of Iran and is interested in deepening relations between the two countries.

He knows the axes of economic cooperation between the two countries well and is trusted by Mr Elham Aliyev.

Mustafaev, who heads the State Commission for Economic, Trade and Cultural Cooperation of the Republic of Azerbaijan and Iran, can play an important role in strengthening relations between the two countries at this time.

This visit, after some disagreements between the two countries in recent weeks, on the one hand, shows the strong will of the 13th government to maintain friendly relations with neighbors and on the other hand symbolizes the decision of the Republic of Azerbaijan to strengthen good relations with the Islamic Republic of Iran.

The meeting of the foreign ministers of the two countries in New York and their three rounds of telephone talks in recent days, which led to a positive approach from the official media in Tehran and Baku, confirms that the two neighboring countries, with long borders and deep friendships, have to respect good neighborliness.

They want to continue their friendly relations in a positive and constructive way.

The fact is that the continuation of joint economic cooperation between its neighbors, especially Iran and the Republic of Azerbaijan, can help strengthen peace and stability in the region and enable the development of strategic relations in the Caspian Sea and the Caucasus zone.

Iran and the Republic of Azerbaijan in the fields of transport, energy, trade, tourism, banking, cross-border cooperation, as well as coordination to deal with emerging threats and challenges such as terrorism and readiness to engage more closely in combating transnational organized crime and drug trafficking.

They can achieve tangible results in this journey.

In the field of foreign policy, the thirteenth government has correctly chosen the slogan of "consequentialism" and, accordingly, considers any progress in the process of bilateral and multilateral cooperation with its neighbors to be subject to the implementation of written agreements and verbal understandings between the country's officials.

Tehran and Baku can also pursue their economic interests by applying pragmatic approaches, in the shadow of positive synergies based on commonalities and in an atmosphere of mutual trust.

The construction of the Rasht-Astara railway, the removal of customs and tariff barriers to increasing trade, the expansion of tourism links, finding a way to exploit the common oil field in the Caspian Sea and cooperation to rebuild the liberated areas of Azerbaijan are among the axes that can be negotiated.

The meeting of the Presidents of the two countries on the sidelines of the forthcoming ECO Summit in Ashgabat, Turkmenistan, on the 28th of November can also be a confirmation of the agreements reached by the Deputy Prime Minister of Azerbaijan to Tehran.

At the same time, the good relations between the two countries, which are rooted in the characteristics of the neighborhood and the unique opportunities for close cooperation, have raised public expectations for this trip and hope that the parties involved can lay a logical and legal basis for continued wider multilateral cooperation.

In general, the visit of the Deputy Prime Minister of the Republic of Azerbaijan to Iran is an important opportunity and a big step that can strengthen bilateral and multilateral relations and be a symbol of the success of the pragmatic diplomacy of the 13th government.