Need for stability and security in Afghanistan 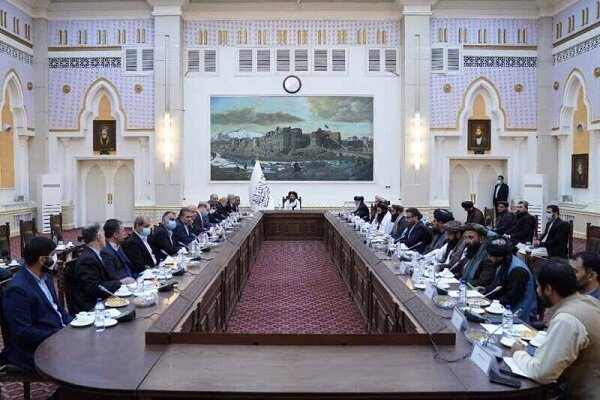 This is the first visit by an Iranian official to Afghanistan since the fall of the previous government.  Kazemi Qomi said he was looking for new coordination between countries on Afghanistan.

He also stressed that some countries are seeking to start a proxy war in Afghanistan in the name of fighting terrorism.

Regarding Iran's position on recognizing the Taliban government, the Iranian special envoy said: "Iran respects the wishes of the Afghan people." The fact is that Iran has several important concerns about Afghanistan, the most important of which is the continuation of instability in this country.

Instability causes insecurity and can quickly spread to neighboring countries, including Iran, which has long borders with Afghanistan.

The existence of insecurity can affect economic, political, international and cultural cooperation.

Therefore creating stability and security in Afghanistan is very important for Tehran.

Iran, along with its other neighbors, has repeatedly called for an inclusive government through popular vote, because if all people and political groups support a government, the government will stabilize.

In this case, opposition groups and supra-regional powers such as the United States, which still has its eyes on the country, cannot take action against the Kabul government.

At the same time, instability has led to the influx of large numbers of Afghan immigrants to Iran.

Iran strives to be a good host for Afghans, but on the other hand, despite harsh sanctions and economic hardship, it has difficulty accepting large numbers of Afghan refugees and asylum seekers.

It is an important dilemma.

Iran seeks to return peace and stability to Afghanistan, and Mr Kazemi Qomi's most important concern is to convey this position to the Afghan authorities.

On the other hand, we are witnessing the gradual rise to power of the terrorist group ISIL Of course, ISIL does not have power alone, but with the support of the United States, which transferred them from Syria and Iraq to Afghanistan, it carries out its terrorist acts.

Naturally, Iran has and still has extensive bilateral relations with Afghanistan.

In the economic field, Afghanistan is a major importer of Iranian goods.

We seek to create diversified transit routes for closer ties with Afghanistan and to meet Afghanistan's needs and economic development.

Afghanistan is one of Iran's fuel markets, and overall the interests of the two countries are diverse in relation to each other.

Throughout history, the two countries have always been together, and creating stability and security can help for the continuation of friendly relations.

What Iran wants is respect for the people.

Any government that the people accept, Iran also accepts.

Iran is pursuing negotiations in coordination with the Taliban and other groups to stabilize but opposes provocative actions in Afghanistan and support for one or more groups against the Taliban.

We have always been with different Afghan groups.

Based on this experience, we know that the cooperation and communication of political groups with each other not only stabilize Afghanistan but also prevents inter-regional countries from interfering in this country.

Due to these issues, we have a good relationship with the groups.

But that does not mean inciting groups against the Taliban government.