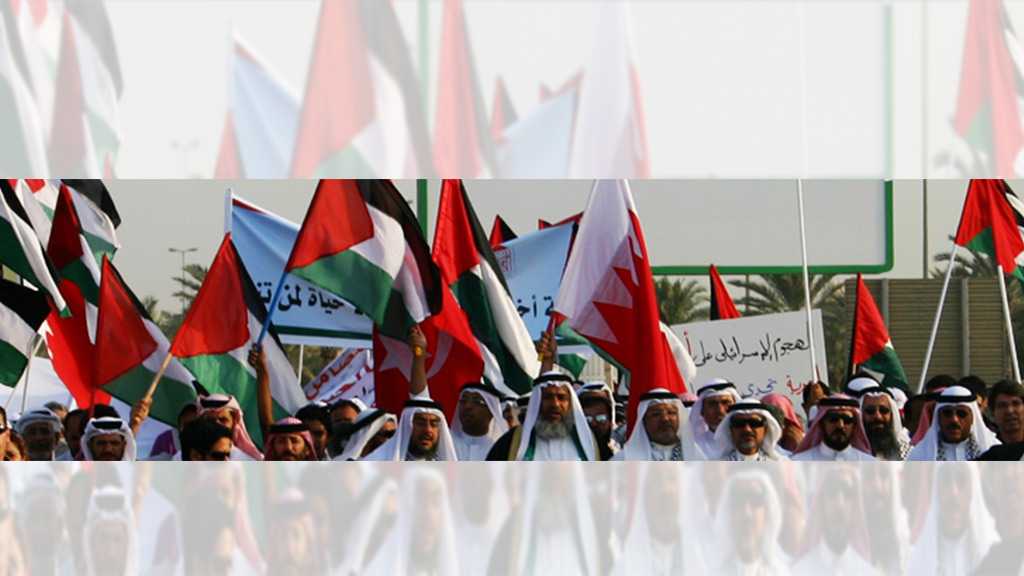 By Julia Kassem, AHT Nine years ago, on February 14 of 2011 to the date, massive anti-government protests swept Bahrain.

Yet the common narrative of Bahrain’s uprising as on the backburner of the failed Arab Spring movement downplayed the real significance of Bahrain in struggle.

Rather than writing it off as a failed after effect of the 2010-2011 protests, Bahrain should be recognized as a struggle of liberation against Western imperialism and occupation on par with the Palestinian struggle.

With a long, established root in history, Bahrain deserves increasing attention and as the Resistance Axis scales up the regional call to expel US occupation following the assassination of IRGC General Qassem Soleimani.

Bahrain is a Gulf island under the monarchist rule of the Al-Khalifa clan that had ruled Bahrain over two centuries, soon receiving the support of Britain following an 1820 treaty with the Al-Khalifa monarchs.

Post-Cold War, the United States would eclipse Britain as the main imperialist backer of Bahrain’s monarchy in the Middle East.

As Britain tightened its relationship with Bahrain in 1919, it had also carved out the blueprint for the occupation of Palestine in 1917 under the Balfour Declaration.

The movement in Bahrain was brutally suppressed not just because of its uprising against one monarchy, but because of the unrelenting popular consensus by demonstrators for a government that is anti-Zionist, anti-American, and democratic.

These calls were met with a brutal crackdown by Saudi-backed authorities that intervened a month later to quell the popular revolt.

Western media narratives had cast Bahrain’s uprising in the shadow of Egypt’s failed ‘revolution,’ relegating it to the backburner of a co-opted Arab “Sting.” Bahrain may not have the highest number of American troops occupying the tiny island, with just neighboring Kuwait and Qatar hosting up to 13,000 US occupying forces each.

It also has been made home to a US naval base since 1947, the oldest of its kind in the Middle East, established one year before the 1948 Nakba, the year the illegal Zionist occupation was made legitimate in the eyes of the so-called “international community.” The United States’ Navy 5th Fleet, established in Bahrain in 1944 as the largest combat fleet in the world was only reestablished in 1995 after being inactive for 48 years.

Yet it has situated itself as the useful output of US regional hegemony in the Gulf, where the “area of responsibility for American fleets shuttling aircraft carriers and destroyers include pretty much every West Asian nation along the Red Sea, Gulf of Oman, Gulf, and some of the Indian Ocean.

Poised for the US to have an easier shot at a number of nations under its threat, occupation, or watch, from Afghanistan, Lebanon, Syria, Iran, or Yemen, to a station to safeguard its the regimes it backs, like Jordan, Saudi Arabia, Bahrain, Egypt, and the UAE, its positionality is becoming even more critical in light of the US’s assaults, sea and land alike, against Iran.

History: Previous uprisings To understand the reason behind the Western/Gulf insecurity behind popular uprisings in Bahrain, historically, one must draw upon the history of resistance against the monarchist elite in Bahrain.

An approximately 5-year uprising that began in 1994, the “uprising of dignity” by a coalition of both Shia and leftist factions against the ruling regime.

In 2006, the Al Bandar report revealed Saudi plans of sowing the seeds of sectarian tension in Bahrain, where a nearly $3 million financing of secret cells in the Bahraini government and its intelligence apparatuses, government operated cover-NGOs, and sectarian propaganda was aimed at an intentional targeting of Bahrain’s more than 70% Shia majority.

That same year, Sheikh Abdul Amir al-Jamiri, a main spiritual leader of Bahrain’s Shia, passed away after decades of commitment and leadership to bringing justice to Bahrain.

Al-Jamiri, the main leader of the mid-90s uprising, was credited for bringing secular leftist and Shia factions together in a unified call against a regime that, in its monarchy, was in service of capitalism, imperialism, and Zionism.

Yet al-Jamiri’s passing would later inspire the unified call for reform and revolt 17 years later.

Like the many agreements and negotiations handed to the Palestinians, this agreement, while bringing the country back to some provisions in the previous constitutional rule the monarchy clan stamped out in 1975, had the effect of doing little to curtail the economic and political supremacy of the monarchy and its systematic oppression of its majority population.

The Bahrain-Palestine connection Both the oppressed of Bahrain and occupied Palestine have suffered for decades under the US’s ambitions to use their lands as military bases, supporting and backing neo-colonial regimes to help instill their political, economic, and military hegemony.

The illegitimate government of both countries continue to US hegemony by, obviously, their military role as US-military bases but also for their benefits for US-dominated capitalism.

For example, the Zionist entity’s tech sector has found its footing and high dependency on the US economy.

According to a December 2019 report by the ‘Israeli’ Ministry of Finance, US investments accounted for 35% of those in ‘Israeli’ tech in 2018, with the total amount of Israeli investors being lower at 30%.

In Bahrain, the royal family has amassed at least $40 billion alone from 2000 to 2010 from land-grabbing schemes for development, both buying properties from the UK and brokering free-trade agreements with the US The result, in taking the lion’s share of land available for people’s commerce and trade, has caused a hike up in land and property prices, compounding the existing and intentional economic conditions of high native unemployment (at 35%) that afflicts the local youth.

The Bahraini regime has accomplished essentially what the Israeli regime has in its occupation of Palestine: the weaponization of land grabbing as a regime-building tool as well as flooding the country with cheap, foreign labor effectively barring the native underclass from any economic agency or access.

More significant is the tactic and prevalence of arbitrary and forced detention endemic to the preservation of both US-backed regimes.

Bahrain is the top country global for political prisoners, with over 14,000 cases of arbitrary detention between 2011 and 2019 alone.

This includes the detention of over 1,700 children.

The Zionist entity, similarly, replicates this tactic and these projections: since 1967, the occupation has arrested over 800,000 Palestinians, including 50,000 children, with over 1,250 minors under arbitrary detention between 2011 and 2018 alone.

Characteristic of the Zionist and Bahraini regimes, in addition to their routine arbitrary detention of civilians and children, is their brutal imprisonment and torture of movement leaders and dissidents; especially those that have played vital roles in uniting opposition.

This is exemplified by the detention of Marwan Barghouti or Khalida Jarrar in occupied Palestine or Ayatollah al-Qassem and Ebtisam el Sayegh in Bahrain.

These are just a few of the hundreds of thousands of leaders and activists that have endured torture, repeated arrests, in order to quell the rich ideological leadership committed to resistance to occupation and oppression in both the Bahraini and Palestinian nations.

Both the Deal of the Century and the recent uptick in torture against Bahraini prisoners of conscience can give their thanks to the acceleration of support and reinforcement from the United States under the Trump administration.

The Obama administration did no more than offer a trickle of lip-service criticism against the Zionist and Bahraini regimes in his time in office, countered anyway by his first-term Secretary of State Hillary Clinton’s warm embrace of both: Clinton has always considered herself a “strong supporter” of the Occupying Entity as she did commend Bahrain’s king.

While the US’s arms sales to Bahrain had somewhat halted under Obama’s term, which had otherwise underwent the steady increase of bombings and drone warfare in the Middle East, due to human rights concerns, the Trump administration had carried out $5 billion in sales of Lockheed’s F-35 fighter jets to the monarchy in 2017.

In 2009, the Bahraini government had planned to spend a billion on security and defense in the country, looking to several Saudi and American defense contractors, including Lockheed Martin, for its purchases.

Just as Trump unveiled and greenlit his development-oriented “Deal” for Palestine, he had also, greenlit massive torture, along with arms sales, to the Zionist, Saudi, and Bahraini regimes.

As one torturer famously said to el Sayegh: “Do you know that we have a green light from Trump?” Similar to how the Zionist entity employs its handsome security packages – a 2018 gift of $38 billion over 10 years – towards brutal neighborhood raids in the West Bank, its next site of total mass expulsion thanks in part to the Deal, Bahrain too has put Trump’s generous donations and pledges to mass raids.

Like the Zionist entity, the Bahraini regime regularly engages in mass-raids.

Shortly after the 2011 uprising, over 430 members of the opposition Al-Wifaq party, also teachers, clinicians, and day-laborers were violently arrested in night raids.

As Sondoss Al Assad, Lebanese journalist who focuses especially on Bahrain wrote in a recent article for American Herald Tribune: “Blessed by Trump's Green Light, Manama has intensified its brutal measures, which also met out collective reprisal against scores of peaceful opposition figures and human rights advocates.” Just last June, the convening to pass the Zionist-American “Deal of the Century” was hosted in Bahrain, signifying the tight knit connection both the Zionist and Bahraini regimes have in extending their influence in the Levant and Gulf fronts, transforming the lands they occupy into development enterprises as well as American military bases.

A Bahraini man Monday was sentenced three years for burning the flag of the illegal Zionist entity at an anti-’Israel’ demonstration last May Bahrain, through history and in its present, is truly emblematic of, as Sayyed Hassan Nasrallah said in a February 16th speech, ‘a treachery platform conspiring against the Palestinian cause.” For this reason, it is imperative that both Bahrain and occupied Palestine be at the heart of the Middle East’s liberation struggle.

It is expected that the Deal will ignite an intifada and regional rejection that has been consistently brewing in occupied Palestine.

At the same time, a regional consensus amongst the resistance axis to expel American presence and forces from all Arab and Muslim soil, particularly in Iraq, will be crucial in Bahrain, and draw the curtains of occupation on both these two birth-sites of US and British imperialism in the region