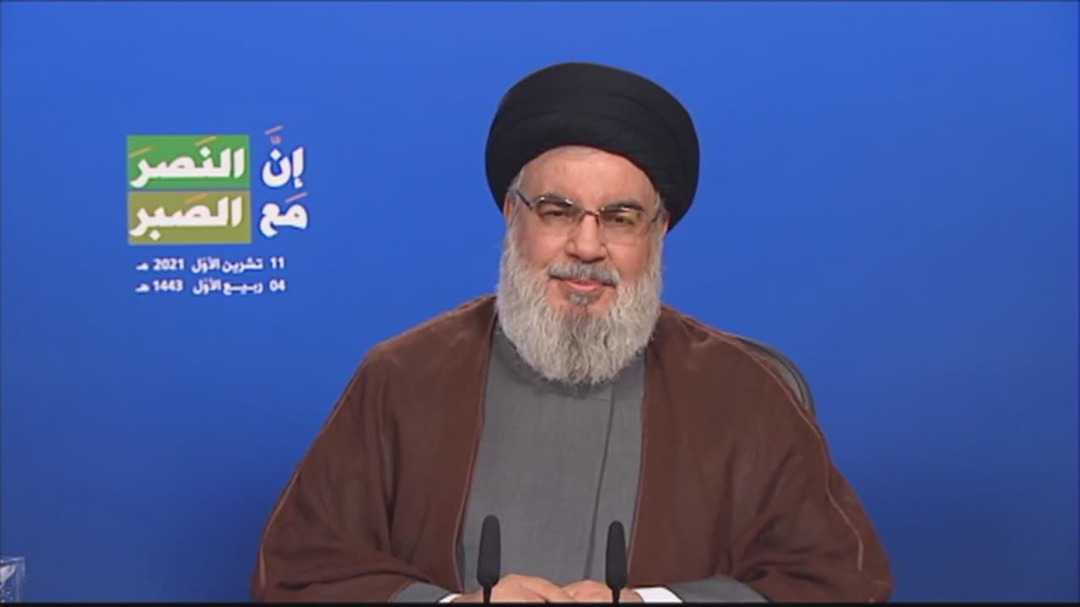 Hezbollah Secretary General Sayyed Hasan Nasrallah stressed on Monday that the legislative elections in Lebanon should be held within its constitutional timeframe, making it clear that there are no indications that any party in Lebanon wants to postpone it.

In a televised speech on political developments, Sayyed Nasrallah pointed out that Hezbollah has no objection to the voting of the Lebanese expatriates on the basis of the existing constituencies, and indicated that he is open to discussion in the parliament on the issue of confirming the six MPs.

“We will not oppose expat voting although it is not fair for us, as though we cannot campaign or vote freely in some countries,” Sayyed Nasrallah said, calling on lowering the age of voting.

“There should be a constitutional amendment to lower the voting age from 21 to 18,” Sayyed Nasrallah indicated, voicing surprise why this amendment had been rejected in previous sessions.

Electricity is a Priority However, Sayyed Nasrallah stressed that the first priority in the coming phase should be the electricity issue.

“The issue of electricity should be the government's priority in the coming session and the country must be put on the track of solution since the issue needs a drastic solution,” His eminence said.

“There are various offers from the East and West to solve the electricity problem in Lebanon, the issue must be resolved,” he added, stressing that the government should make power shortages a priority, referring to the total blackout that occurred on Saturday when Lebanon’s two largest power plants ground to a halt, which he called was like a ‘clinical death’ for the country.

If there is an American veto on keeping the electricity problem unresolved, Hezbollah leader said, it must be announced so that to address this issue in an appropriate way.

“Let the government ask for a sanctions waiver and let the Lebanese companies go and buy and then we will withdraw from this file completely.” I call on the government to agree to the Iranian proposal for the construction of two power plants and to obtain a US waiver of sanctions, his eminence indicated.

“I reiterate my call for the government to seek a waiver of sanctions in order to import fuel from Iran.

You must respond to the latest offer made by the Iranian Foreign Minister to solve the electricity problem in Lebanon.” Iranian Foreign Minister Hossein Amirabdollahian, on a visit to Beirut last week, announced the Iran was ready to build two power plants in Lebanon, one in Beirut and the other in the south of the country, in a period of 18 months.

No official comment in response to this offer was issued till now.

The Hezbollah leader implied that there was an intentional effort to make the electricity sector in Lebanon collapse in order to force it to privatize.

Iran Diesel Fuel in 2nd Stage On the issue of importing diesel from the Islamic Republic of Iran, Sayyed Nasrallah said: “Now we are still in the first stage of importing fuel which will continue until the end of October.

We will renew the diesel donation for a second month in a row, and will add fishermen and less fortunate municipalities to the list of eligible parties for such grants.” “Our priority in this phase is securing diesel fuel to Lebanese due to several reasons,” the SG pointed.

The second phase will include fuel for heating for families in Lebanon, he added.

Bitar ‘Biased, Politicized’ Concerning the investigations into the August 4, 2020 Beirut Port blast, Sayyed Nasrallah said Hezbollah was “resilient on Beirut Blast investigations since we were mainly inflicted by its repercussions,” lashing out at the lead investigator into the blast Judge Tarek Bitar as being biased and politicized.

“The port blast judge is acting like an ultimate ruler in this file.

The targeting is clear, you are picking certain officials and certain people, the bias is clear,” Sayyed Nasrallah said.

Pointing to that Bitar was continuing his predecessor’s mistakes and going far beyond, Sayyed Nasrallah stressed that the investigative judge should identify those who brought the nitrates ship to Beirut port.

“Bitar should have told the families of the victims how the ship came, under whose name and under whose approval,” his eminence said.

“Why haven’t Bitar heard the testimonies of President Aoun and ex-president Suleiman despite that Aoun demanded to be questioned previously? Has he asked the former premiers whether they are responsible or not? He instead rushed to summon ex-PM Hassan Diab,” Sayyed Nasrallah wondered, noting that the responsibility of judges was bigger than that of presidents, ministers and MPs, because they are the ones who gave approvals for the nitrates ship.

“What’s going on in the Beirut port probe is an extremely huge mistake and we won’t allow that the issue continue in this manner in the coming days,” Sayyed Nasrallah stressed.

Afghanistan, Palestine, & Prophet Mohammad's Birthday On an international level, Sayyed Nasrallah strongly condemned the terrorist attack on a mosque in Afghanistan’s Kunduz that was committed by Wahhabi ISIL terrorists, indicating that the aim of attacking a Muslim Shiite mosque in Afghanistan was to drag the country to a civil war.

“The American administration and its policies bear the responsibility of all the blood being shed in Afghanistan,” Sayyed Nasrallah pointed out.

“It is a moral duty to stand before the Palestinian martyr, the brave thinker Nizar Banat, who was assassinated by a force from the Palestinian Authority,” said Sayyed Nasrallah, adding that he “listened to his recordings and read his stances and was impressed by his pure thought about Palestine and the conflicts in the region.” Sayyed Nasrallah demanded justice from the PA, saying that the cause of Banat’s death must be confronted with justice and truth.

At the end of his speech, Sayyed Nasrallah called for a mass participation in the huge ceremony commemorating the birth of Prophet Mohammad that would be held in the coming days.