Sayyed Nasrallah Announces Arrival of First Oil Tanker: Hezbollah Would Engage in Naval Confrontation with 'Israel' If It Strikes Ships 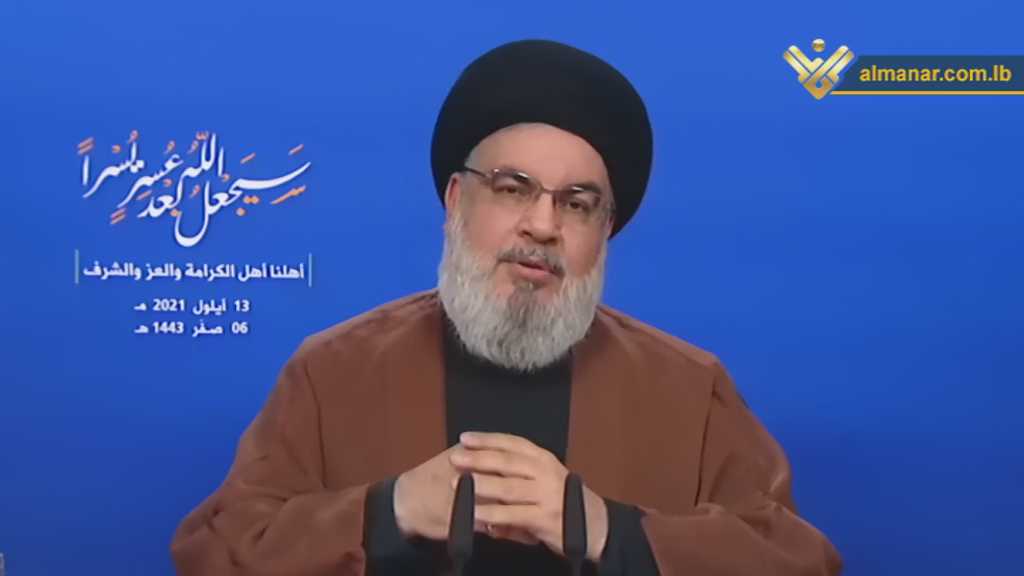 The diesel will be stored in Baalbeck city before distributing it over the various Lebanese areas, Sayyed Nasralalh said.

In a televised speech, Sayyed Nasrallah noted that the second diesel ship will arrive in Banyas seaport in few days, adding that a third ship will bring gasoline from Iran to Lebanon and that Hezbollah has started to prepare importing a fourth oil tanker from the Islamic Republic.

In this regard, Sayyed Nasrallah clarified that Hezbollah does not aim at engaging in an economic com0-petltition with the Lebanese companies concerned with importing oil, stressing that the Resistance Party wants exclusively to relive the socioeconomic agonies of the citizens ans the rest of residents in Lebanon.

Hezbollah leader indicated that the Party does not want to impose its oil imports on the Lebanese, adding that only those interested can contact the concerned cadres in order to obtain the imported fuel.

In this concern, Sayyed Nasrallah explained that that Hezbollah will donate diesel over one month to the governmental hospitals, nursing and elderly centers, orphanages, centers of the disabled, state water companies, the municipalities in need of running well pumps, the Red Cross, and the Civil Defense.

Sayyed Nasrallah added that diesel will be sold to the pharmaceutical and serums factories, mills, bakeries, supermarkets, and private power companies at a certain price which will be lower than the cost, adding that Hezbollah and Iran will bear a part of the financial burden in this regard.

The companies which will benefit from this diesel must reduce the prices of the services so that the Lebanese people will suffer less from their costs, according to Sayyed Nasrallah who underscored the importance of preventing the black market dealers from reaching the imported fuel.

Sayyed Nasrallah called on the Lebanese government to order the Lebanese Army and security forces to monitor and control the distribution of the subsidized oil materials in order to ban the black market dealers from benefiting from them.

Sayyed Nasrallah also thanked the Islamic Republic of Iran, Supreme Leader Imam Sayyed Khamenei and President Sayyed Raisi for their support in this file, expressing gratitude to the Syrian government as well for facilitating importing the Iranian fuel ships.

Meanwhile, Sayyed Nasrallah clarified that Hezbollah did not want provoke any other Lebanese party, adding this explains why the movement of the first ship was not accompanied by an intensified media coverage despite the hostile propaganda which tried to frustrate all this project.

Some political sides wished 'Israel' could have struck the ship and banned its arrival, according to Hezbollah Secretary General who added that the Resistance could have engaged in a naval confrontation with the Zionist enemy had this happened.

Sayyed Nasrallah pointed out that the same deterrence formula, that protects Lebanon, protects the fuel ships from the Israeli enemy.

Sayyed Nasrallah also highlighted that repercussions of Hezbollah decision to import the Iranian fuel, mentioning the US approval of the restoration of the Lebanese official ties with the Syrian government as well as the project aimed at importing the Egyptian gas and Jordanian electric power.

Sayyed Nasrallah further noted that the arrival of the Iraqi fuel will help reduce the power shortage in Lebanon, thanking the Iraqi authorities for their aid.

Gilboa Escape Operation Hezbollah Secretary General hailed the escape operation of the six Palestinian prisoners who broke out of Gilboa jail despite all the Israeli security measures, considering that it reflects the bravery and innovation of those who carried it out.

Sayyed Nasrallah stressed that the escape operation delighted all the honorable people and that the recapture of four of the prisoners does not mitigate its repercussions, calling for protecting the two remaining prisoners.