Sayyed Nasrallah Asks Lebanese Statesmen Rejecting Eastern Economic Offers for Fear of US Sanctions: Why Don't You Make Sacrifices for Sake of Lebanon? 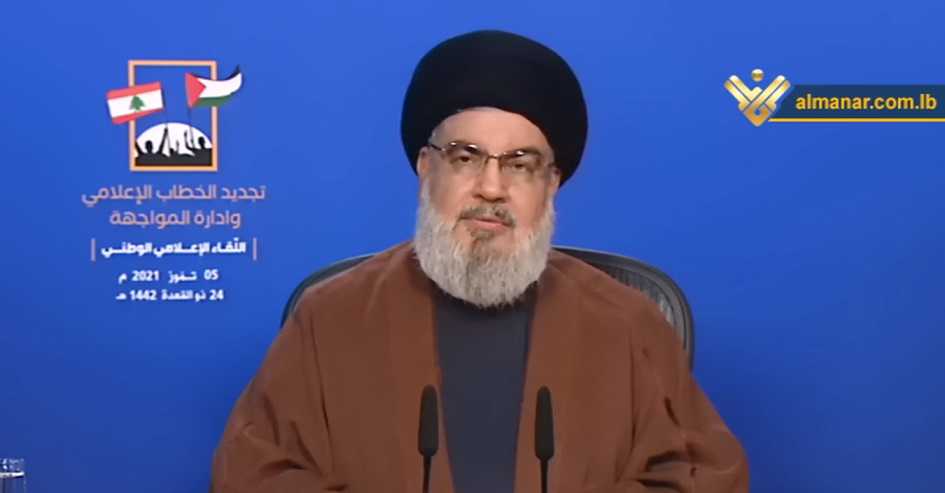 Hezbollah Secretary General Sayyed Hasan Nasrallah stressed on Friday that the US sanctions and pressures on Lebanon aim at pushing the Lebanese to concentrate on their living conditions away from all their responsibilities towards the conflict with the Israeli enemy. 'Although it is s a tough and complicated task, we have to focus on the both tracks (addressing the internal crisis and assuming the responsibilities towards the conflict with the Zionist enemy),' Sayyed Nasrallah maintained.

Addressing the opening session of the conference held to discuss the renovation of the media rhetoric and administering the confrontation, Sayyed Nasrallah indicated that the US policy in the Middle East has been based on stirring internal sedition in the countries which belong to the axis of resistance and besieging them economically in order to let their people on their daily-life concerns, not the strategic ones. 'They have relatively succeeded.' Hezbollah Secretary General pointed out that the governmental deadlock in Lebanon is caused by the Constitutional flaws, attributed the socioeconomic crisis in Lebanon to the US siege which prevents any country from aiding Lebanon, state corruption, money embezzlement, and the monopoly phenomenon. Sayyed Nasrallah also blamed some citizens whose hasty actions at the gas stations help the enemy ti achieve its goal, wondering about the causes which push them to open fire at such popular places.

Hezbollah leader asked the US allies in Lebanon, 'Isn't it the USA that prevents all countries from helping Lebanon in order to secure its own interests and serve those of 'Israel', regarding the naturalization of the Palestinian refugees and plunder of the Lebanese oil resources, and threatens to impose sanctions on the Lebanese officials if they approve economic deals with any Eastern country, including China and others?' In this regard, Sayyed Nasrallah mentioned that Lebanon has major chances to cope with the socioeconomic crisis, adding that Russian and Chinese firms have offered the Lebanese authorities several investments.

Lebanese officials have rejected all those offers for fear of the US sanctions, according to Sayyed Nasrallah who asked those official, 'Does not saving Lebanon from the socioeconomic crisis deserve some sacrifices?' In this concern, Sayyed Nasrallah recalled the human sacrifices made by all the factions of the Lebanese resistance in order liberate the nation from the Israeli occupation.

Sayyed Nasrallah added that the US ambassador to Lebanon sheds crocodile tears and deceives the Lebanese by providing some masks, noting that Washington has been the main supporter of the corrupts and money embezzlers in Lebanon.

Indicating that the US administration has been adopting the same policy against Gaza, Syria, Iraq, Yemen and Iran, Sayyed Nasrallah explained that Caesar Act has banned all the countries from investing in Syria reconstruction.

'Even Syria allies dd not dare to start such investments.' Sayyed Nasrallah stressed that the US policy aims at instigating the Lebanese people, especially the resistance supporters, against the resistance itself, calling for patience, sacrifice, and perseverance.

Regarding the Lebanese cabinet formation, Sayyed Nasrallah pointed out that the upcoming days will witness several meeting and developments.

Meanwhile, Sayyed Nasrallah reiterated Hezbollah rejection of any attempt to politicize the investigation into Beirut Port blast, repeating his call on the judiciary to announce the outcomes of the probe.

Sayyed Nasrakllah considered that leaking the subpoena issued against a number of Lebanese politicians politicizes the investigations, underling the importance of adopting unified criteria in this regard.