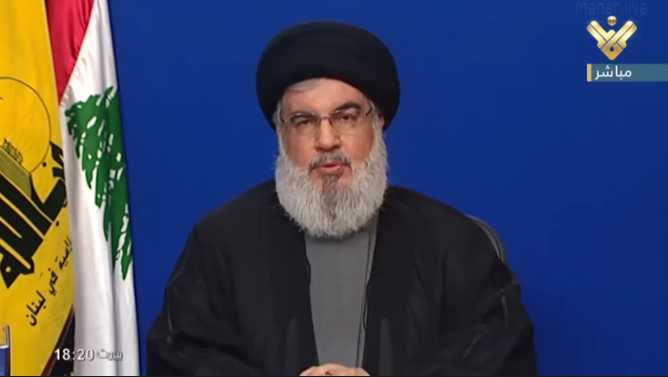 Hezbollah Secretary General Sayyed Hasan Nasrallah indicated on Friday that some Lebanese parties unfairly insists on accusing Hezbollah of hindering the cabinet formation in Lebanon and attributing it to false assumptions related to Iran's nuclear deal.

Delivering a televised speech to tackle the latest developments in Lebanon, Sayyed Nasrallah stressed that Iran has always rejected to include any issue in the Vienna talks other than the nuclear deal.

'The Islamic Republic does not accept to negotiate on behalf of anyone, neither the Lebanese, Syrians, Yemenis, Palestinians, nor the Bahrainis.

Iran just helps as a friendly country upon request.' Sayyed Nasrallah pointed out that Hezbollah has always rejected the governmental void, recalling that the Party rejected the resignation of PM Saad Hariri after the protests in 2019.

Calling for a speedy cabinet formation in light of the deteriorating living conditions and the fuel crisis in Lebanon, Sayyed Nasrallah mentioned that Hezbollah delegation has met with MP Gebran Bassil and that Speaker Nabih Berri has met with PM-designate to facilitate the government creation process.

Commenting on the call of MP Bassil pertaining the cabinet formation, Sayyed Nasrallah stressed that Hezbollah has started to help in the context of defending the rights of all the Lebanese.

Sayyed Nasrallah affirmed that the 8-8-8 formula does not exist in the government, warning all parties against taking false stances based on this assumption.

In this regard, Sayyed Nasrallah stressed that the Lebanese Shia Muslims are not seeking tripartite power-sharing, adding that they also reject such proposals.

'Minister Bassil dd not entrust me with the rights of the Christians and I think no one of the political forces with similar influence may accept the share which satisfies Hezbollah.' Hezbollah has its distinct conditions that let it accept certain shares and reject the role of settling the governmental dispute, according to Sayyed Nasrallah who added that  MP Bassil is smarter enough to avoid driving a wedge between Hezbollah and Amal Movement.

Sayyed Nasrallah emphasized that Hezbollah supports only the righteous demands pertaining the cabinet formation, giving the example of backing the President's power of participating in the creation of the government and the PM-designate rejection of granting one political team the veto share in the council of ministers.

Hezbollah Chief also commented on the reactions made by some Christian parties to MP Bassil's call, stressing that sectarianism and racism have blinded them.