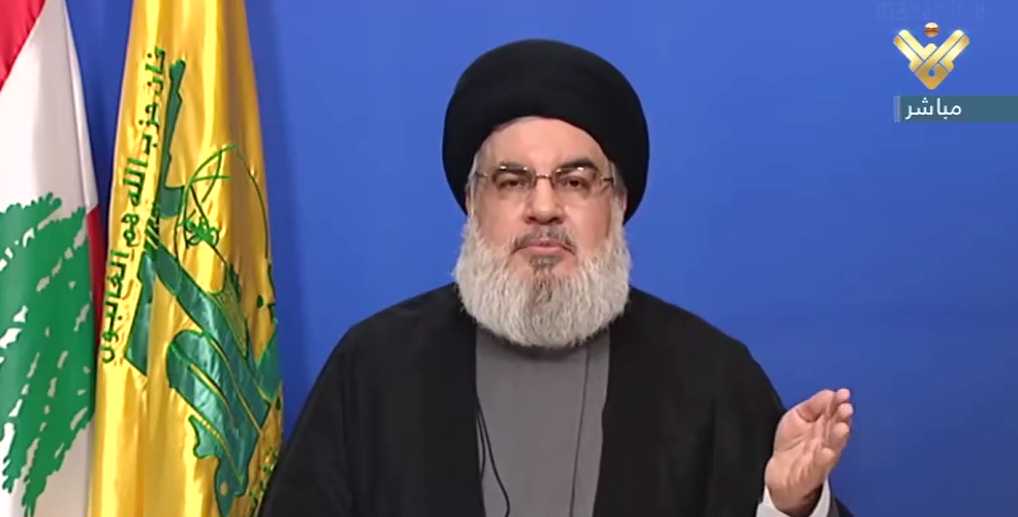 Hezbollah Secretary General Sayyed Hasan Nasrallah stressed on Friday that the focus of US administration's policy in Lebanon has been, at least since 2005, on the Resistance, adding that, had Lebanon been valuable for the Americans, Europeans and some Arab regimes, we would not have witnessed all these sanctions.

'All what they care for is Israel and protecting its security and interests.' US President Donald Trump's son-in-law, Jared Kushner, attended in person the normalization meeting between Morocco and Israel as well as the Gulf Summit, according to Sayyed Nasrallah who added that the Americans show interest in the maritime border negotiations between Lebanon and the Zionist enemy just because it affects the security of the occupation's entity.

Beirut Port Blast Sayyed Nasrallah considered that Beirut Port explosion is a national cause that concerns all the Lebanese, adding that it is forbidden to give it political, religious or regional dimensions because this would be unethical non-human and that the martyrs and the affected by the explosion belong to all the Lebanese groups.

'It is forbidden to politicize the cause or give it a sectarian aspect.

The port explosion killed 200 people, wounded thousands and affected the entire economy.' Sayyed Nasrallah pledged that Hezbollah will insist on a fair and honest conclusion for the port file due to the humanitarian aspect of the explosion, which left martyrs and injuries as well as huge losses, and the politicization committed by some parties which throw false accusations at Hezbollah and its allies President Michel Aoun as well as the Free Patriotic Movement.

'Some Christian political parties always face the President Michel Aoun as well as the Free Patriotic Movement by recalling Hezbollah rhetoric and acts.' Sayyed Nasrallah emphasized that the families of the martyrs have the right to know the truth pertaining the port blast, calling on the Lebanese Army and Internal Security Forces to announce the result of their probe.

In this regard, Sayyed Nasrallah stressed that the indictments against caretaker PM Hassan Diab and ex-ministers Ali Hassan Khalil, Ghazi Zoaiter and Youssef Fenianos were based on the sectarian balance, not any legal standard.

Hezbollah leader called for announcing the result of the probe so that the Lebanese can follow up the judiciary performance.