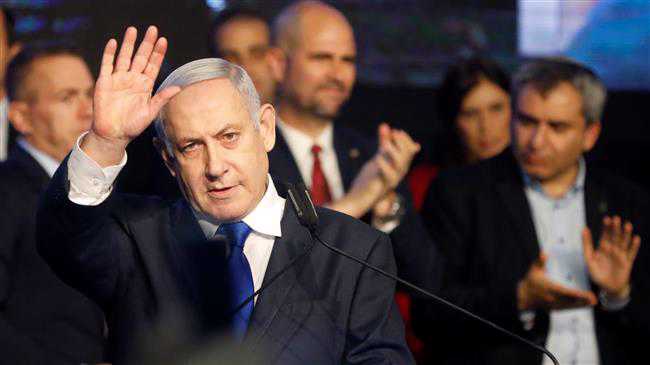 Senior officials from Israeli Prime Minister Benjamin Netanyahu's Likud party have reportedly been working behind the scenes to bring him down following his indictment on corruption charges.  After three years of investigations, Israeli Attorney General Avichai Mandelblit charged Netanyahu with fraud, breach of trust and bribery in three different scandals on Thursday.

In the 63-page indictment, the Israeli premier was accused of accepting hundreds of thousands of dollars in luxury gifts from his billionaire friends and trading favors with Israeli media and telecommunication moguls in exchange for positive news coverage.

Israeli call for Netanyahu
Dozens of Israeli protesters have called for Netanyahu’s resignation for breach of trust and fraud.
On Friday, Israel's Channel 12 TV reported that top Likud members have been convinced “the Netanyahu era is over” and are trying to unseat him as the party's head within the current 21-day period allotted for the parliament (Knesset) to agree on a prime minister.

The Likud figures believe that the only way to topple Netanyahu is to unite behind a single replacement, who will attempt to muster the support of 61 members of the Knesset in the 120-seat legislature, according to the report.

However, it added, the party officials are showing no sign of being able to do so.

Separately on Friday, Israel's Channel 13 TV reported backroom talks on an alternative to Netanyahu, citing an unnamed person saying, “We are trying to figure out how to wrest the party from his hands.” Both Channel 12 and 13 reported that the attorney general intends to rule Netanyahu would need not to resign at this stage, but that he would have to relinquish the four ministerial posts he currently holds, namely the agriculture, health, social services and diaspora affairs.

According to Channel 13, several Likud lawmakers have said they would refuse to serve as ministers as it could taint them in the future.

Netanyahu is Israel's first sitting prime minister to be charged with a crime.  He has rejected his indictment on corruption charges as an “attempted coup” against him stemming from “false accusations” and a systematically “tainted investigation.” A new poll found that 56 percent of Israelis believe Netanyahu cannot continue to govern after being indicted.