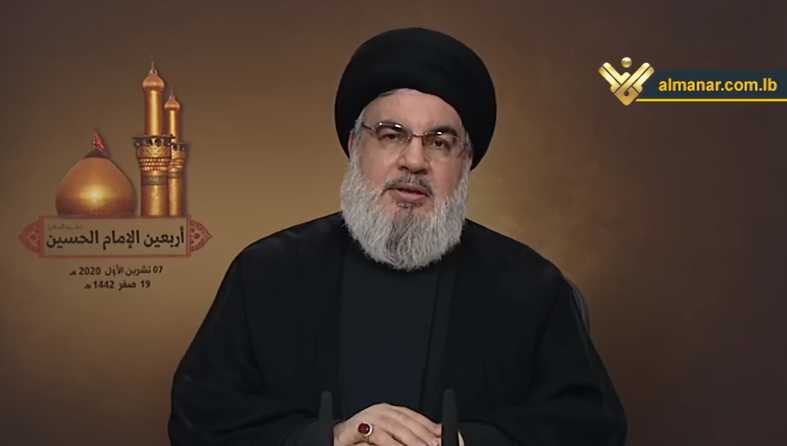 Hezbollah Secretary General Sayyed Hasan Nasrallah delivered on Wednesday a televised speech on Arbaeen which marks 40 days after the martyrdom anniversary of Imam Hussein (P), tackling the various aspects of Ashura and the role of the Imam (P).

Sayyed Nasrallah highlighted the importance of marking Ashura anniversary and personifying the values of Imam Hussein (P), underlining the distinct relation between Prophet Muhammad (P) and his Grandson.

Hezbollah leader indicated that the coronavirus measures have prevented millions of believers from heading into Karbala this year, recalling that the ousted regime in Iraq used to prevent believers from visiting Imam Hussein’s Shrine in Karbala on Arbaeen.

'I myself witnessed how Saddam Hussein’s warplanes used to strike believers’ processions on Arbaeen.' Sayyed Nasrallah underscored the occasion's attraction force which pushes millions of people to abandon all their life concerns and head into Imam Hussein's Shrine where thousands of people provide food to the visitors and help them perform the related rituals.

The occasion, known as Ashura, marks the martyrdom of Imam Hussein and 72 of his companions in 680 AD in a land that is known today as Iraq, after they refused to pledge allegiance to the tyrant Yazid.

Ashura is the culmination of a 10-day annual mourning period in the lunar month of Muharram for the third Imam of Shia Muslims, who was a grandson of Prophet Muhammad (Peace be upon Him).