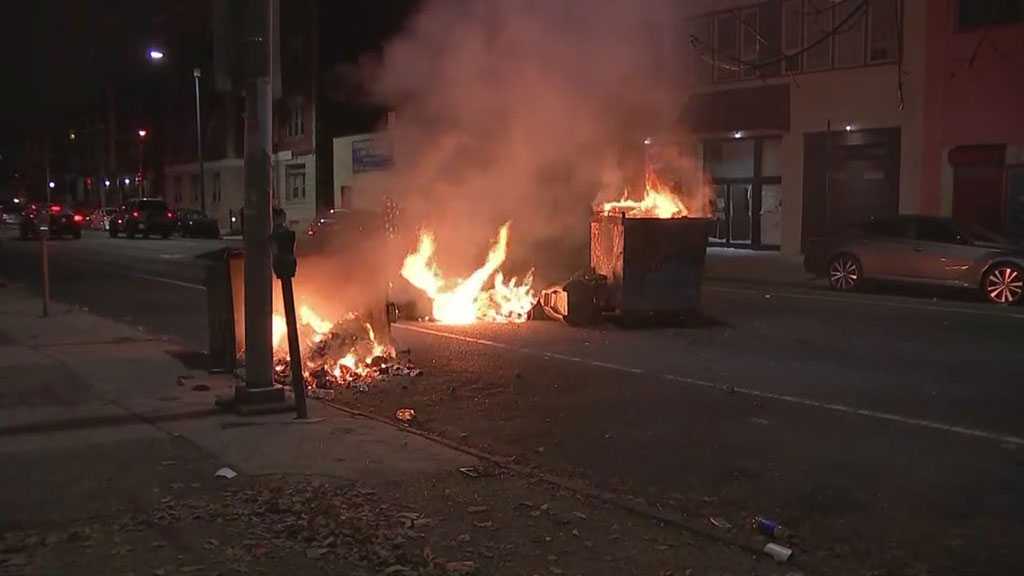 By Staff, Agencies After two nights of protests and looting following the fatal police shooting of Walter Wallace Jr.

in West Philadelphia, a curfew is now in effect for the city.

The curfew went into effect at 9 p.m.

A small group of protesters gathered outside the 18th Police Precinct in West Philadelphia Wednesday night.

Meanwhile, Mayor Jim Kenney says the National Guard is deploying and the first troops are expected to arrive in the city on Friday.

As evening arrived and the sun set, business owners put the final touches on their makeshift barriers, hoping a third night of looting and violent demonstrations does not materialize.

“Just boarding up, we got hit last night,” said the owner of Sun Laundromat, Kevin Phang.

“I mean, it really sucks because you know, this is our only location.

We’re not a big corporation where we lost a store, it’s fine, the next day we’ll still make money.

For small businesses, it really sucks.” City officials are hoping a newly-enforced rule in the form of a 9 p.m.

“A curfew allows us to control the environment, especially in areas where we have seen civil unrest,” said Philadelphia Police Commissioner Danielle Outlaw.

She says the goal is not to penalize those who are peacefully protesting but rather the curfew allows police to identify so-called agitators who are mixing in with the crowds.

“They know, the agitators know that we have to be very methodical about how we identify who the agitators are, then make direct contact with them and also at the same time ensure we are not indiscriminately impacting those who have nothing to do with those who are causing the agitation,” Outlaw said.

“Protest, you know, what I mean.

That is our God-given right but this doesn’t help, especially with everything that is going on in 2020,” said Phang.

The curfew is creating a new hurdle for businesses already hurting from the pandemic.

Mayor Kenney says the city will assess the situation each day, then decide if they need to continue implementing curfews.

While some restaurants in Center City entertained guests up until 9 p.m., some have opted to keep their doors closed for the day.

The last time the City of Philadelphia faced a curfew was back in June after looting and rioting that followed the George Floyd protests.

The National Guard was brought in to keep the city under control.

For now, Philadelphia police and other agencies are holding down the fort.

If need be, the earliest the National Guard can arrive in Philadelphia is Friday or Saturday.

Meanwhile, although restaurants will close early, they will still be able to make deliveries but will need to ensure the safety of their employees.

“Grocery stores, restaurants and pharmacies may, in their discretion, choose to operate only for delivery services after 9 p.m.

They should implement appropriate measures to secure their facilities and protect on-site and delivery employees,” Kenney said.

Police say 81 arrests were made overnight — 53 of them for burglary — and 23 officers were injured.

They have since been treated and released.

Overall, since Monday, 172 arrests have been made and 53 officers have been injured, including a female officer who was struck by a vehicle.

Police say looting along Aramingo Avenue in Philadelphia’s Port Richmond neighborhood Tuesday night was a “total loss.” “I’m very disturbed by the damage that is being done in the communities,” Kenney said during a Wednesday press conference, saying he has requested the Pennsylvania National Guard to help deal with the looting in the city.

in West Philadelphia on Monday.

Police say Wallace walked towards the officers while holding a knife and refused to drop it He was shot 14 times and neither officer was carrying a taser, officials say.

Wallace’s family is pleading for the unrest to end.

“Have respect for my family and my son and stop this violence and chaos that’s going on in the city,” Walter Wallace Sr.

Wallace’s mother, Cathy Wallace, recounted the seconds before the shooting.

“I was telling the police to stop.

As the formal investigation continues, family attorney Shaka Johnson gave details about what led to the encounter.

“The man was suffering.

He was on doctor’s care.

He was on a regiment of lithium, etc., and the police were here earlier that day,” Johnson said.

Johnson says police were called at least three times to the home.

The final 911 call was made by Wallace Jr.’s brother, asking for medics.

“The ambulance never made it,” Johnson said.