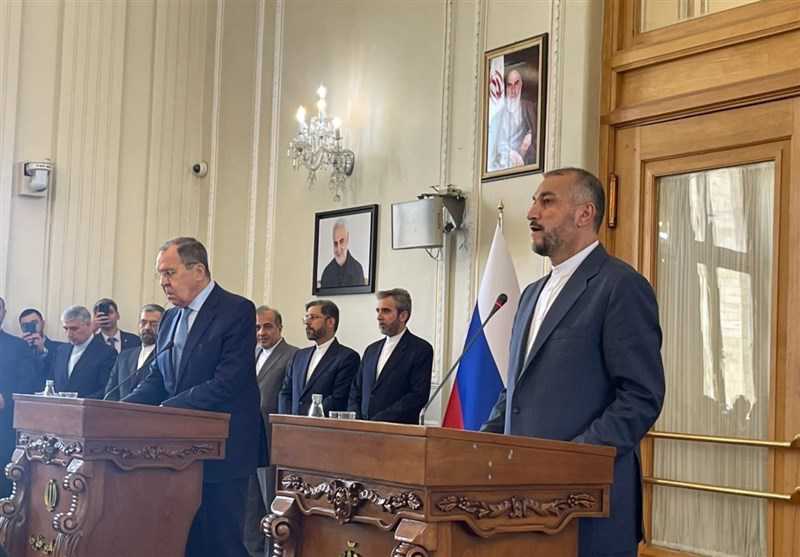 TEHRAN (Tasnim) – The foreign minister of Iran lauded Russian support for Tehran’s stances in the course of Vienna talks on the revival of the 2015 nuclear deal, hoping that Washington’s sense of realism would push the talks closer to an ultimate agreement. - Politics news - Speaking at a joint press conference with Russian Foreign Minister Sergei Lavrov, held in Tehran on Thursday, Amirabdollahian said they have discussed plans for the Vienna talks about the JCPOAExpressing hope for the resumption of the nuclear negotiations in the near future, the Iranian foreign minister said, “I hope we could reach the final point of an agreement in the near future with the American party’s realism.”He also noted that Lavrov has reaffirmed Russia’s support for Iran’s political stances and for the achievement of an ultimate deal in the JCPOA talks.Amirabdollahian thanked Russia and China as friendly states for voting against an anti-Iranian resolution that the US and the European troika initiated at the International Atomic Energy Agency recently.“We also praise Russia’s constant support for the continuation of works at the International Atomic Energy Agency and for the Islamic Republic of Iran’s regional interests and stances,” the top Iranian diplomat stated.Amirabdollahian pointed to his talks with Lavrov about the Zionist regime’s “political howls”, saying the region would not permit Israel to threaten security, stability and progress.He further expressed hope that a summit meeting of Iran, Russia and Turkey would be held in Tehran as part of bilateral talks and also within the framework of the Astana format.For his part, the visiting Russian foreign minister said Moscow and Tehran are determined to broaden relations.Pointing to an 80 percent rise in the annual trade exchanges between Russia and Iran that stood at around $4 billion in the last year, Lavrov called for new ways of cooperation in the energy sector, transportation, agriculture, financing and customs affairs.The US should not be allowed to change the international principles, the fundamentals of the UN Charter and the equality of sovereignty of states, he stressed, adding that Moscow and Tehran condemn the unilateral US sanctions that violate the UN Charter.On the JCPOA talks, Lavrov said the purpose is to rectify the mistake that the US has made.Deploring the US for violating the international law by withdrawing from the nuclear deal and breaching the UNSC Resolution endorsing it, the Russian foreign minister emphasized that the JCPOA should be revived in the original form as in 2015, without any additional subject.In 2018, then US president Donald Trump announced Washington’s withdrawal from the Iran nuclear deal.

The current head of the US administration, Joe Biden signaled a willingness to rejoin the agreement and talks on the revival of the JCPOA began in Vienna, Austria.On March 11, 2022, a break was taken in Vienna after eight rounds of talks to restore the JCPOA to its original form and bring the US back into the agreement due to external factors.

Prior to that, the Vienna talks had reached the finish line and were expected to be completed by the end of February.

The text of the agreements reached was agreed upon and is about 20 pages long, outlining further steps to return to the nuclear agreement in its original form.