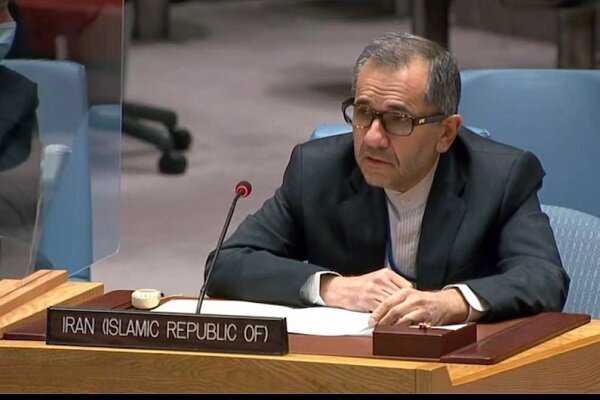 TEHRAN, June 22 (MNA) – Iran's Permanent Ambassador to United Nations Majid Takht Ravanchi strongly condemned the imposition of sanctions by some governments that use them as political leverage in their bilateral relations.Speaking at a meeting of the UN General Assembly on Tuesday evening, Iran UN Envoy said that Islamic Republic of Iran considers unilateral coercive measures as one of the main obstacles for international efforts to provide humanitarian assistance and also one of the main sources of creation of humanitarian crises around the world.

The critical humanitarian situation in Afghanistan, Syria, Palestine and Yemen has caused great pain and suffering to the people of the region, he said, adding that massive influx of Afghan refugees into neighboring countries has exacerbated this catastrophe, he added.

As a country exposed to a variety of natural disasters such as earthquakes, droughts, dust and sandstorms, Iran has severely been damaged by illegal unilateral sanctions imposed by the United States, Takht Ravanchi underlined.

In line with the Sendai Framework for Disaster Risk Reduction, a practical step is expected to be taken under the strict supervision of the United Nations to strengthen cooperation with regional countries, especially neighboring states, in controlling disasters such as dust, he added.

Iran also supported the statement made by the Pakistani representative on behalf of the Group of 77 and China.

The Group-77 and China pointed to the negative social and economic effects of unilateral coercive measures and negative consequences of these sanctions on the capacity of target countries to respond effectively to humanitarian challenges including Covid-19 pandemic and reminded commitments of governments to lift and refrain from imposing sanctions.