Gen. Soleimani sacrificed his life for unity among Muslims 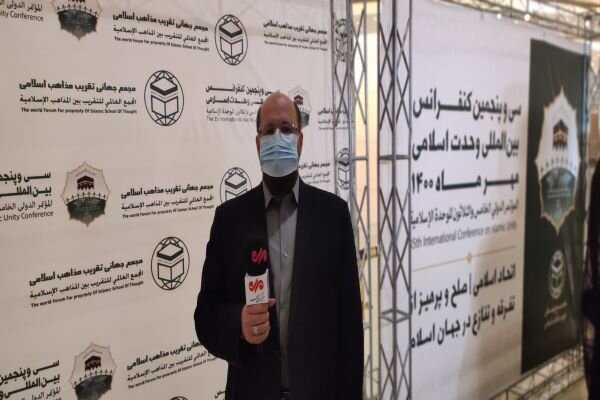 Gen, Qasem Soleimani as one of the pillars of the stability of the region, the head of the Hamas bureau in Iran said that Martyr Soleimani sacrificed his life for the concept of unity among Muslims.

The 35th edition of the International Islamic Unity Conference was officially inaugurated in Tehran on Tuesday morning as over 400 Muslim scholars, elites and religious leaders discussed the present conflicts, security, and relations in the world of Islam.

On the sidelines of the conference, the head of the Hamas bureau in Iran, Khaled Al-Qaddumi made some remarks in response to some questions raised by Mehr News Agency correspondent over regional issues.

Following is the text of the interview with him: As you know, recently we have witnessed some efforts to create instability in some regional countries such as Iraq and Lebanon.

In your opinion who benefits from instabilities in region?

When it comes to instability all Palestinians go to think of the Zionist regime and the hegemonic government of America.

Previously the people were thinking about this issue, but today they feel it.

Today, the Zionist regime's direct hands and intervention in our region is very public and known to everybody.

They have assassinated Iranian scientists with immunity and no one holds them accountable.

What we can feel today is that the Israeli regime is everywhere, it is in Iraq, it is in Yemen and it is in Lebanon.

All people should know that the main criminal for all those instabilities is the Zionist regime.

He paid all his efforts and he sacrificed his life for the concept of unity among Muslims.

So, he was the man that you could find him positively everywhere in favor of the stability of the region.

They assassinated him and today we have really lost a great figure in the Resistance.

If we ask you to describe Martyr Soleimani in one sentence, what would you say? General Qasem Soleimani was a philanthropist, a friend, and a big brother for all depressed people of the region.