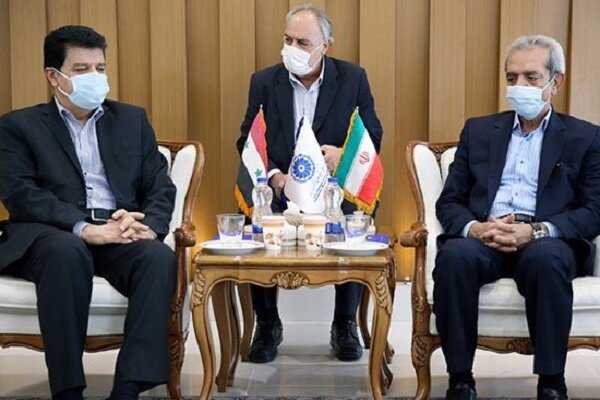 TEHRAN, October 20 (MNA) – In a Monday meeting with the Syrian envoy to Tehran, the ICIAMA head said the implementation of the free trade agreement between Iran and Syria will bring good days in mutual trade, which is what the two countries want.Head of Iran Chamber of Commerce, Industries, Mines, and Agriculture (ICCIMA) Gholam-Hossein Shafeie, in this meeting, noted that Iran has made the most level of its investments in Syria.

"The Iranian trade center in Damascus is one of the largest Iranian centers outside the borders, which can play an important role in the development of trade between Iran and Syria," he said." The Syrian Ambassador Adnan Mahmoud, for his turn, expressed gratitude for the ICCIMA efforts in improving mutual trade ties.

"There is a strong will in the two countries to strengthen economic and industrial relations and to establish mutual relations between their various sectors, both public and private, and we will do our best to eliminate the impact of oppressive sanctions on our economies and bilateral strengthen trade relations." The Iranian trade center in Damascus, covering 4,000 square meters of land in the heart of Damascus, has become operational with the investment of Iran’s Iran Chamber of Commerce, Industries, Mines and Agriculture.

As reported, the center is equipped with all business needs, including, marketing, transportation, and consultation offices, as well as banking and insurance branches.

Some 24 Iranian firms have started operation in the trade center.

Iran and Syria agreed on the establishment of an Iranian Trade Center in Damascus free zone back in January.

The decision was made during a visit by an Iranian economic delegation to Syria.

The two countries have been exchanging numerous trade delegations in the past few months and Iranian private companies are investing in different areas like providing construction materials especially cement and working on several reconstruction projects in Syria.