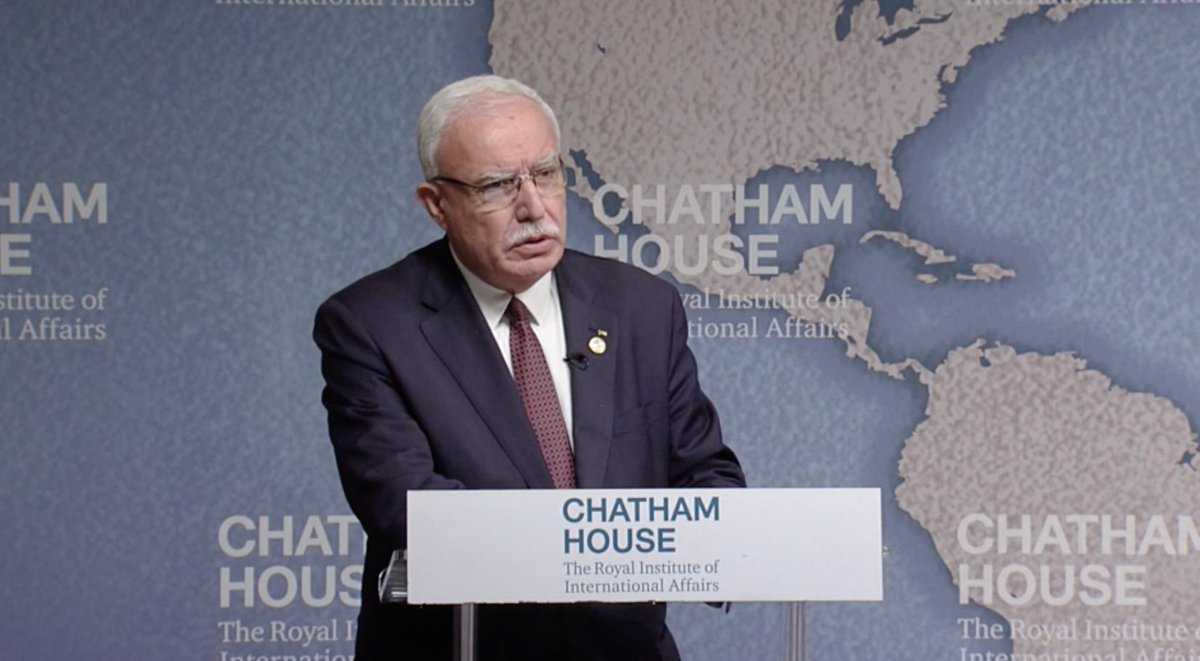 Chatham House, the international affairs think-tank in London, recently invited Dr Riad Malki, Palestine’s minister of foreign affairs, to talk about the future of Palestine ahead of the “Deal of the century” dreamed up by the Trump administration.

Malki is involved in shaping the Palestinian response to that initiative when it is finally revealed.

During questions Raffi Berg (pictured above), editor of the BBC News website’s Middle East section, said that while the official Palestine Liberation Organisation’s (PLO) position is for two states as the solution to the conflict, he mischievously suggested that the recent Israel election results showed that Israelis consider the Palestinians’ position to be “insincere”.

He asked: “Can you make clear whether you fully accept the presence of Israel as a country in the Middle East within/outside [indistinct] the 1967 ceasefire line?” This sounded a little off-key from the BBC, which is supposed to maintain an air of utter impartiality.

However, Malki dealt with the unfriendly prod quite firmly: We have made it very clear that we are going to accept, and we have taken the decision to accept, the establishment of an independent Palestinian state on the 1967 borders, to accept the historic compromise that the state of Palestine will be established on the 22 per cent of historic Palestine.

It is not only the Palestinian position, it is the position of almost every country around the world. He reminded the audience that there is international consensus about the two-state solution and that the Palestinian state should be established on the 1967 borders with Jerusalem the capital of Palestine and of Israel.

Robert Stuart vs the BBC: One Man's Quest to Expose a Fake BBC Video about Syria .article-related-inner { width: 250px; float: left; margin: 5px 15px 5px 0; background: #D2D3D5; text-transform: uppercase; } We have also agreed in principle that we are ready during negotiations to talk about territorial exchange but always to keep the 1967 border as the border of the state of Palestine.

So, we are not going to accept anything less than that. If anyone talks about the State of Palestine on less than the 1967 border, or the State of Israel beyond that line, this is not acceptable because it defies not only the negotiating position but international law and the international consensus. I recently wrote about Hanan Ashrawi, a long-time member of the PLO executive and an all-round formidable lady, saying we should see and hear more of her in a front line spokes role.

The same goes for Raid Malki who is well informed and articulate and came across well at Chatham House.

That they remain invisible to the Western world is the fault of the PLO and Palestinian Authority who are simply not media savvy and stubbornly intend to remain that way.

Their embassies (or missions) around the globe are the same.

Malki was a one-time leading member of the Popular Front for the Liberation of Palestine and has a PhD in civil engineering from the American University.

His impressive CV includes Head of the Civil Engineering Department at Birzeit University, the European Peace Prize in 2000 in Copenhagen and the Italian Peace Prize (Lombardi) in 2005.

He is a visiting professor at several European universities.

In his Chatham House speech Malki pulls no punches: “I know that some may be uncomfortable to hear the words ‘colonialism’ and ‘apartheid’ associated with Israel.

But they are what we experience on a daily basis and what is visible to the naked eye.” As for America, “the US administration has shown nothing but disregard for Palestinian rights and Palestinian lives, for international law and the internationally recognised terms of reference, and for common sense and decency”.

The Palestinian people, he insists, “want freedom not conditional liberty.

They want sovereignty and not limited autonomy.

They want peace and coexistence not domination and subjugation.

He continued: There are two ways to end the conflict: a peace accord or capitulation, meaning a surrender act.

We continue to stand ready to negotiate the peace accords based on the internationally recognised terms of reference and the pre-1967 borders, under international monitoring holding accountable the parties and within a determined and binding timeframe.

We will never be ready to sign a surrender act. It is worth watching the video.

Sparks are set to fly when Trump and Kushner eventually unveil their big deal.

I’m not a reader of the BBC News website.

Long ago I came to distrust the BBC’s reporting of Middle East affairs, so I tend to ignore it.

Berg’s line of questioning prompted me to look deeper and I found this piece from 2013 by Amena Saleem in Electronic Intifada titled “BBC editor urged colleagues to downplay Israel’s siege of Gaza”, in which she reports that Berg, during Israel’s eight-day assault on Gaza in November 2012 which killed nearly 200 Palestinians, emailed BBC staff to write more favourably about Israel.

He urged them, allegedly, not to blame Israel for the prolonged onslaught but to promote the Israeli government line that the “offensive” was “aimed at ending rocket fire from Gaza”, despite the fact that it was Israel which broke the ceasefire.

In another email, he told them: “Please remember, Israel doesn’t maintain a blockade around Gaza.

Egypt controls the southern border.” However, the United Nations regards Israel as the occupying power in Gaza and had called on Israel to end its siege, which is a violation of UN Security Council Resolution 1860.

It is interesting to read that Berg’s boss until last year was James Harding, an ex-Murdoch editor and self-proclaimed Israel supporter – a strange choice for a supposedly non-partisan head of BBC News.

Almost as strange as the appointment around the same time of ex-Labour minister and former Chairman of Labour Friends of Israel James Purnell as director of strategy at this beacon of impartiality.

Purnell is still there